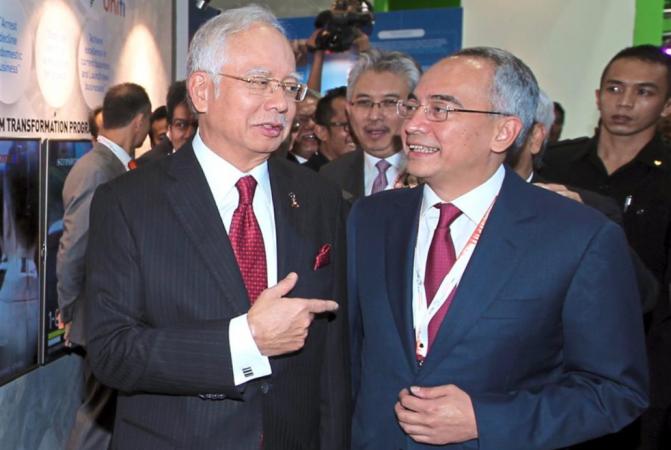 Two Brothers, Which To Believe?

Nazir Razak rose to be the chief executive of Malaysia’s largest bank. Could this be mere meritocratic coincidence or cronyism is the question, given his Dad was prime minister, his uncle prime minister as was his brother?

He is also known to be a very wealthy man, demonstrating the sort of powerful ostentatious spending (including a palatial residence in London and fleets of expensive cars) that would rival the heads of Goldman Sachs.

And, he himself has been caught up in the embarrassment of funnelling millions of stolen readies from 1MDB to aid his brother during the GE14 campaign. He has explained it was an innocent attempt to oblige Najib, although perhaps a wee bit naughty to be secreting out millions in undeclared notes like that, when an average customer could have been reported and sent to jail? Nazir received a fine and dropped his job.

What the above does tell us on the other hand is that Nazir Razak is a bona fide insider, nay fully blooded practitioner, at the top of the Malaysian establishment who knows what is going on and how it has affected his country.

However, unlike his brother he is free and independent of the system and has no obvious motive to lie about its failings in order to keep out of jail or even return to office. Nazir has frequently spoken his mind, in fact, often in terms most unflattering towards his brother which one might interpret as sibling rivalry and resentment (which Najib plainly does), or as twinges of conscience or just honest intellectualism from a person who has lived at the top and observed from the inside. Perhaps it’s a bit of all of these?

High on a crest following his public ‘rehabilitation’ just last week by a new PM who needs his vote (in Malaysia it seems disgraced and convicted MPs are not disowned by their party or expected to resign) Najib plainly believes he can eventually get the courts to accept that his sacks of cash were honestly acquired, barring the odd dastardly conspiracy on the part of Jho Low, Goldmans Sachs, PetroSaudi, Sheikh Mansour and the like to raid Malaysia’s billions to make him even richer.

He even this week sued his former deputy then successor as PM for suggesting that pressure could be brought upon the courts to achieve such desirable outcomes, following his political deal to support the present PN 2.0 government after after having brought it to its knees.

By contrast, Nazir has at the same time quietly gone back on the record to analyse in a public address the present situation in Malaysia which has allowed for such disgraceful scenes and to express his own concern about the country’s future. His views perfectly reflect the complaints of the opposition reform movement in the country and indeed the majority of the population who voted out what Nazir has dubbed the Three Headed Monster at the last election, only to see it return thanks to big money and corruptible MPs.

Nazir described the Three Headed Monster as arising from the nailing down of power by UMNO following the massacre of May 1969. He claims it brought ‘stability’ but at the expense of “increased corruption, hardening communal identity, and Umno’s concentration of power”.

The saying follows that ‘power corrupts and absolute power corrupts absolutely’. Nazir’s speech makes clear he agrees that his brother’s UMNO party is indeed absolutely corrupted and that it has brought the country to the brink of total failure

“It is a monster because it is hard to slay. It fights off any attempts of reforms and there have been many attempts, notably in the earlier years of the (Abdullah Ahmad) Badawi, Najib (Razak), and the second Dr Mahathir (Mohamad) administration, but without much success…… In the case of Abdullah’s GLC reforms, there was initially considerable success. But progress was soon reversed and GLCs were dragged into the realm of politics with leadership appointments, financial scandals with the likes of Felda, Tabung Haji and most dramatic of all, 1MDB,” ”

As electors in Malaysia have realised only too clearly UMNO is indeed far too degenerate to be able to clean its own house, much as the above attempts may have sought to do. It’s why UMNO was voted out in 2018.

For example, Badawi’s attempt to increase transparency reforms, particularly with regard to the issuing of government contracts, have simply been reversed without explanation after the likes of Sarawak Report used those platforms to show how government ministers were handing hundreds of millions in contracts to their own families and themselves. It is no longer possible to access such information, no explanation given – allowing ministers to get back to looting without public observation.

Likewise, to grease the greedy clerics of PAS and other bought up allies, PN/UMNO have agreed to present top-paying GLC positions to a swathe of totally unsuitable and unqualified politicians in total defiance of all principles of good governance and avoiding conflicts of interest.

Nazir should own up to the full implications of what he is acknowledging in this latest well-informed jibe at the establishment cronyism from which he has himself thrived. His convicted brother ought to be nowhere near the corridors of power, let alone appointed to a position as Financial Advisor (full pay and perks) to the Government of Malaysia. He should be treading the corridors of Sungai Buloh because all he has to teach Ismail Sabri is how to illegally look what little is left of the public’s hard pressed coffers.

Nazir Razak should put some of his own controversial millions instead towards supporting the hard pressed opposition, who now face standing up once again to the power of looted 1MDB cash (now returned by PN 2.0 to his brother) and the other stolen billions in the hands of UMNO, in order to restore an elected government that can carry out genuine much needed reforms and a zero corruption agenda to rescue Malaysia from total ruin.

Read the remarks in the Malaysian Insight on Nazir’s speech:

However, increased corruption, hardening communal identity, and Umno’s concentration of power were the negative effects that came out of it.

“Over time, these three negative effects do and arguably overwhelm the positive impacts of the system, so much so I have often described Malaysia as being ruled by this three-headed monster,” he said in his keynote address at The Pandemic and The Case for a National Reset webinar.

“It is a monster because it is hard to slay. It fights off any attempts of reforms and there have been many attempts, notably in the earlier years of the (Abdullah Ahmad) Badawi, Najib (Razak), and the second Dr Mahathir (Mohamad) administration, but without much success,” he added.

He said there was considerable success in Abdullah’s reforms for government-linked companies (GLCs). However, progress was soon reversed.

“In the case of Abdullah’s GLC reforms, there was initially considerable success. But progress was soon reversed and GLCs were dragged into the realm of politics with leadership appointments, financial scandals with the likes of Felda, Tabung Haji and most dramatic of all, 1MDB,” he said while adding that the 1MDB debacle shook the very foundation of Malaysian politics.

Nazir, who is the brother of former prime minister Najib Razak who oversaw 1MDB, said the Covid-19 pandemic has exposed the country’s systemic flaws.

While former prime minister Muhyiddin Yassin’s government seemed to have had things under control initially, political dysfunction snatched the initial victory away, he added.

“Muhyiddin’s weak majority also made it difficult for him to hold politicians accountable and the fractured nature of Malaysian politics also meant that despite the onset of a war (the pandemic), we could not get any form of cooperation from across the aisle,” Nazir said.

He added that the high national debt also limited the government’s capacity to provide fiscal support and impeded it from raising funds through windfall taxes and other avenues.

“On the social front, Covid-19 exposed our underinvestment in healthcare, social safety net, and digital infrastructure.

“We saw Malaysians struggling to put food on the table with the white flag (movement),” he said, while also referring to the plight of migrants.

“In short Covid-19 was far more debilitating than it should have been because of our systemic functions. It will be a tragedy if we don’t learn the hard lessons that are in front of us and reset,” he added.

He said Malaysia must look at history during the early 70’s and how the NOC, which was set up during his father, former prime minister Abdul Razak’s tenure, had crafted structural reforms.

“We need to do that now,” he urged, while acknowledging the difficulty in pushing for change given the state of Malaysian politics, which is intertwined with race and religion.