The newly published book that seeks to exonerate Najib over 1MDB/SRC is written by his ex-communications manager, Roman Bose, who was himself handsomely paid from money stolen from 1MDB.

The book, reprehensibly published by Penguin, claims both that Najib was innocent – on the grounds this ‘wise finance expert’ was ‘duped’ into receiving the stolen money – and also that the sum that he ‘innocently stole’ amounted to so little in the scheme of things that the fuss being made and his conviction is all ‘political’.

What Bose describes as a relatively ‘minuscule’ sum is the ‘mere RM42 million’ that Najib has so far been convicted of receiving into his own accounts from SRC’s local bank – “only about 0.22% of the US$4.5 billion (RM18.6 billion) that US prosecutors say was supposedly looted from 1MDB” as Bose lightly put it.

Najib said the exact same thing last week, calling for his crimes to be “put in proper perspective“.

The author like his ‘bossku‘ is therefore selectively ignoring the other charges that are still being processed through the courts relating not only to 1MDB but also to the lion’s share of the RM4 billion borrowed from KWAP by SRC.

As the Appeal Court judges have reminded, this was money that Najib himself bullied KWAP into lending and which the fund only finally agreed to in return for a government guarantee that Najib personally pushed through the cabinet.

As the court had also heard, Najib, in his role as the sole decision maker at SRC, then personally authorised at a meeting on September 7th 2011 for the bulk of first half tranche of this money, RM1.5 billion, to be immediately sent abroad to BSI bank in Switzerland.

In March/April 2012 the bulk of the second RM2 billion loan was also transferred to BSI meaning a total of RM3.6 billion was exported on Najib’s instructions (US$855 million).

The court has further heard how when the Swiss authorities later announced (October 2016) they had frozen US$800 million of this cash in BSI on suspicion of misappropriation and money laundering Najib made no effort whatsoever to respond to the invitation by the Swiss Attorney General to identify the money or claim it back.

The crime was merely denied and ignored and Malaysia’s money left in limbo. This was because, far from being duped, the then Prime Minister was still trying to pretend there had been no wrong doing at 1MDB/SRC where he was the only man in charge.

A duped man would have come to his senses when the Swiss identified and froze so much missing money and taken action to rectify matters. However, there are clear reasons why Najib could not acknowledge the situation, owing to facts that Bose appears willing to ignore.

Najib’s excuse for sending the $3.6 billion to BSI had been that it was being “parked” for ‘transit’ into proposed investments he and his expert finance team apparently had in mind.

However, as Sarawak Report revealed in 2016, the first ‘transit’ to have taken place was of no less than US$170 million, just over half a billion ringgit in Malaysian currency at that time (RM523.4 million), which BSI forwarded to SRC’s account at the private bank Julius Baer Hong Kong branch in November 2011. 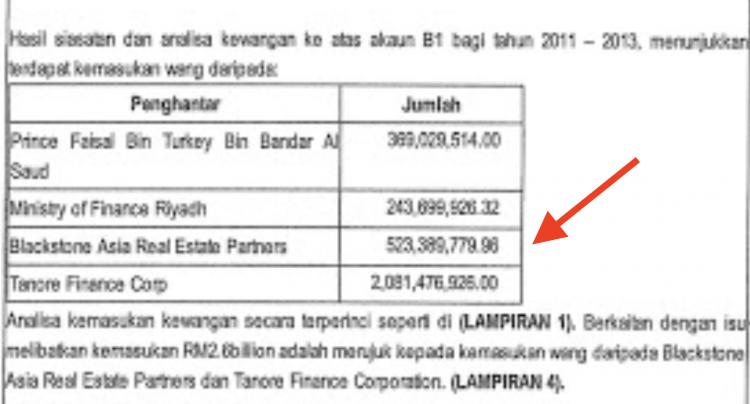 That money was then transferred not to a business investment but rather, through the intermediary of Jho Low’s bogus off-shore company, Blackstone Asia Real Estate Partners Ltd’s account at Standard Chartered in Singapore, into Najib’s own notorious AmBank account no: 2112022009694 in KL.

The transactions all took place within the same month, according to information from leaked SPRM investigation paper,s and the amount leaving BSI in Switzerland in dollars matched the amount arriving in ringgit at Najib’s account (see above).

Take a look at the diagram produced by DAP’s Tony Pua that clarifies the money trail:

US$170 million was transferred from SRC November 2011 to Julius Baer account in Hong Kong. It was then sent to Jho Low’s bogus off-shore company Blackstone Asia Real Estate Partners and then on to Najib’s KL dollar account.

So, does Bose wish to argue that Najib did not notice that such a sum of money had entered his account – surely the bank manager would have called him up? Or is US$170 million/ RM523,389,7709 simply another small amount that needs ‘putting in perspective’?

Given that the rules of SRC meant that Najib was the only person who could have authorised these transfers, one might have thought that this shrewd financial operator,  who continues to lecture the government about how to run the economy, would have spotted that what had arrived in his account was the same humungous sum he had earlier instructed SRC to send to Julius Baer?

Alternatively does Bose subscribe to the excuse that Najib had been duped into thinking Blackstone Asia Real Estate Partners was the company being used by ‘Saudi Royal donors’ to hand him money? (remember he claimed the ‘royal donation’ was made in 2013 not November 2011).

This seems odd, since Najib DID receive one major if highly questionable donation from the Saudis of RM243.9 million. This was apparently indeed designed to support his political regime. However, that cash was clearly and openly sent direct from the Saudi Ministry of Finance as the SPRM fact sheets show, not through some secretive off-shore shell company with a bogus identity owned by Jho Low.

Therefore, as the courts have concluded. Najib didn’t just steal a teeny bit from SRC and he wasn’t duped. He diverted a humungous RM4 billion dollars out of Malaysia through the fund and a quarter of that had gone into his own account within just a couple of months of the first stage of the theft in November 2011.

Given the above, does Penguin at last feel in a position to give a statement to journalists about its reasons and justifications in publishing this apologist propaganda book on behalf of a convicted Kleptocrat?

This particularly since the writer Roman Bose has found fit within its pages not only to predict that Najib will return ‘in triumph’ to his former leadership of Malaysia, but to nakedly threaten critics whom he describes as Najib’s enemies to “feel afraid” in anticipation of that event?

People do not take threats from Najib lightly in Malaysia, given the cover-up surrounding the investigation into the murder of Najib’s whistleblowing translator at the hands of his own bodyguards is still the subject of legal disputes – with her family and others pointing to Najib as the man who had a motive.