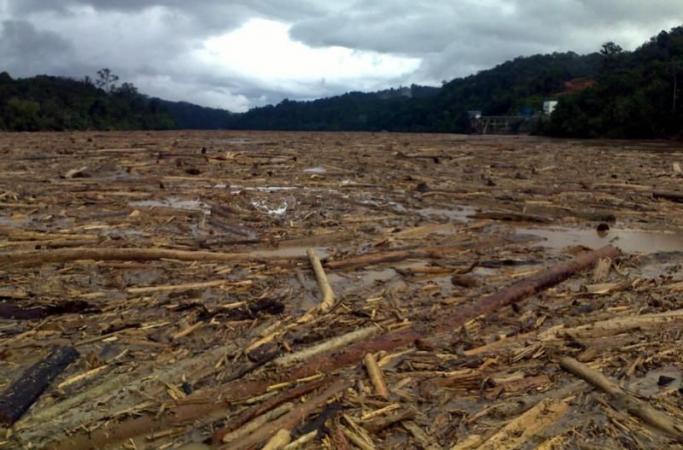 With despicable cowardice and evasion of responsibility the State Forestry Department in GPS run Sarawak has blamed local communities for the appalling log-jam plainly caused by irresponsible and unmonitored grand-scale logging in Baleh.

So what really lies behind this tragedy and who is actually to blame?

It is the GPS government that is solely responsible for the commissioning of a totally unnecessary and unwanted dam in this interior region of the state, where conveniently too few people live to effectively oppose it.

The construction of the project is the responsibility of the state-owned SEB and oversight of logging of the Sarawak Forestry Department.

The excuse for this policy of relentless dam building (there was an original programme for 12 such mega-dams which native communities have campaigned to oppose) is based on GPS’s alleged projected hydropower requirements for Sarawak’s small population of just three million people which are totally unrealistic and which belie an existing glut created by already constructed but unneeded dams.

It is notable that virtually none of the electricity generated from such dams (let alone the cash benefits) has been channeled to the local communities whose lands have been devastated by these constructions in the name of ‘progress and development’. Vaunted plans to turn sleepy Sarawak into a global industrial hub thanks to the dams have likewise produced extremely limited results.

So, why on earth?

There is one glaring and obvious incentive behind this pointless and destructive dam building programme for the political class within GPS which runs Sarawak like a mafia business, which is money for themselves.

Dams like Baleh have enabled the state to borrow billions in public funding to be funnelled through the businesses engaged in these enormous projects, which are naturally to a large extent owned by their own families.

And, of course, (the real prize) vast areas of Sarawak’s remaining areas of forest need to be felled to clear the basin for the proposed dam.

Billions of ringgit worth of timber have thus been released to be licensed for logging under the usual secretive processes that prevail in the criminally managed state, from which politicians and crony businessmen have emerged ridiculously rich. Yet, so far, no one has named the logging companies who have received those licences to log out the Baleh basin nor which companies have been operating in the region from which the vast debris has now fallen into the river. Deputy Chief Minister, James Masing, who harkens from the region has merely chastised anonymous loggers.

Good practice and care for the environment are not salient characteristics of Sarawak’s major logging operations. Mud slides, debris, vast piles of logs precariously perched on hillsides, on the other hand, are. The reasons for the failures of Sarawak Forestry (both side-lined and under-funded) to enforce good practice have been well documented – their job is to turn a blind eye as politicians get rich.

It has therefore been of no surprise to anyone at all that this latest tragedy has occurred  after the first major rainfall in the hinterland of the Baleh Dam project. It was in fact predictable and predicted. Vast quantities of heavy timber and debris have swept into the Rajang River system creating the biggest log-jam since the tragic global record breaking disaster back in 2010.

The death and destruction caused to river life and the impact to local communities is total in the region.  Nothing wreaked by nature has caused such damage in Sarawak in human memory, certainly in the memory of the native peoples who have lived in harmony with their environment for thousands of years in Borneo before the advent of the businessmen politicians now represented by GPS.

So, naturally the blame game began immediately. The constructors behind, the Sarawak Energy Board (SEB), were swift to chime in first to claim that this disaster has absolutely nothing to do with them. No matter that the timber involved has been chopped down from exactly the area that is being cleared in order to fill the basin of the dam.

Neither still is the GPS government prepared to come forward to admit to which of their crony companies the huge logging operations that have carelessly discarded millions of tons of timber were granted. Instead, politicians are raging against anonymous entities.

Thus, it has eventually emerged that these two responsible bodies, through a statement put out by the plain useless Sarawak Forestry Department, are willing to put all the blame for this monstrous eco-crime on the sparse native communities inhabiting the region and their by-gone practice of shifting cultivation!

As if these poor communities could ever have accumulated the capital to mobilise the armies of bulldozers and trucks required to fell such swathes of forest even if they wanted to. To the contrary, it is because of the devastation already wreaked by state government licensed incomers that shifting cultivation can no longer take place, as local community leaders from the Nanga Antawau  Kapit Welfare Association have hit back to explain:

The forest is the habitat and hunting ground for native people, who for millennia have cleared small areas to grow food and then moved on, leaving those areas to re-generate fully. These indigenous folk also need the river for its fish and clean water and vegetation, but the practice of shifting cultivation has all but died out in the modern economy in this area.

No one anywhere will buy this cowardly and mean buck-passing excuse by dirty raiding timber pirates, supported by their GPS political cronies and SEB (who all allegedly failed to notice the vast clearances that have carried on for months just a short distance away from their own major construction site).

This corrupted regime has not only failed the people once again in the act of robbing them, but has now shirked from owning up to their own basic responsibility for this outrageous and predictable disaster caused by self-interested policies, shady licensing and a total failure of oversight by the state government of Sarawak.

Yet again, these rich, educated and powerful GPS decision makers have instead sought to blame the weakest, poorest and most disadvantaged victims of their own greedy conduct over decades. It is hard to think of anything more craven and deceitful.