GEORGE TOWN: The crumbling, disfigured figurine of a tiger in one of the oldest Nine Emperor Gods temples in the country may not look like much now, but it certainly holds at least two centuries’ worth of artistic and cultural history.

About 200 years old now, the original sculptors of the Senior General Black Tiger figurine in the Tow Boo Keong Temple in Jalan Cheong Fatt Tze (formerly, Hong Kong Street) were made with materials to represent the five elements in Chinese philosophy, but the passage of time eroded the figurine to the point that it now has to be sent to an expert restorer.

To do this, an elaborate ceremony was held yesterday to “invite” the deity to move into a new tiger figurine so that the aged figurine could be sent for restoration.

The temple’s fifth-generation abbot, Khoo Poh Ong, 86, said the original figurine was filled with nails to represent metal, then coated with clay to represent earth, while the outermost layer was paper mache to represent wood. 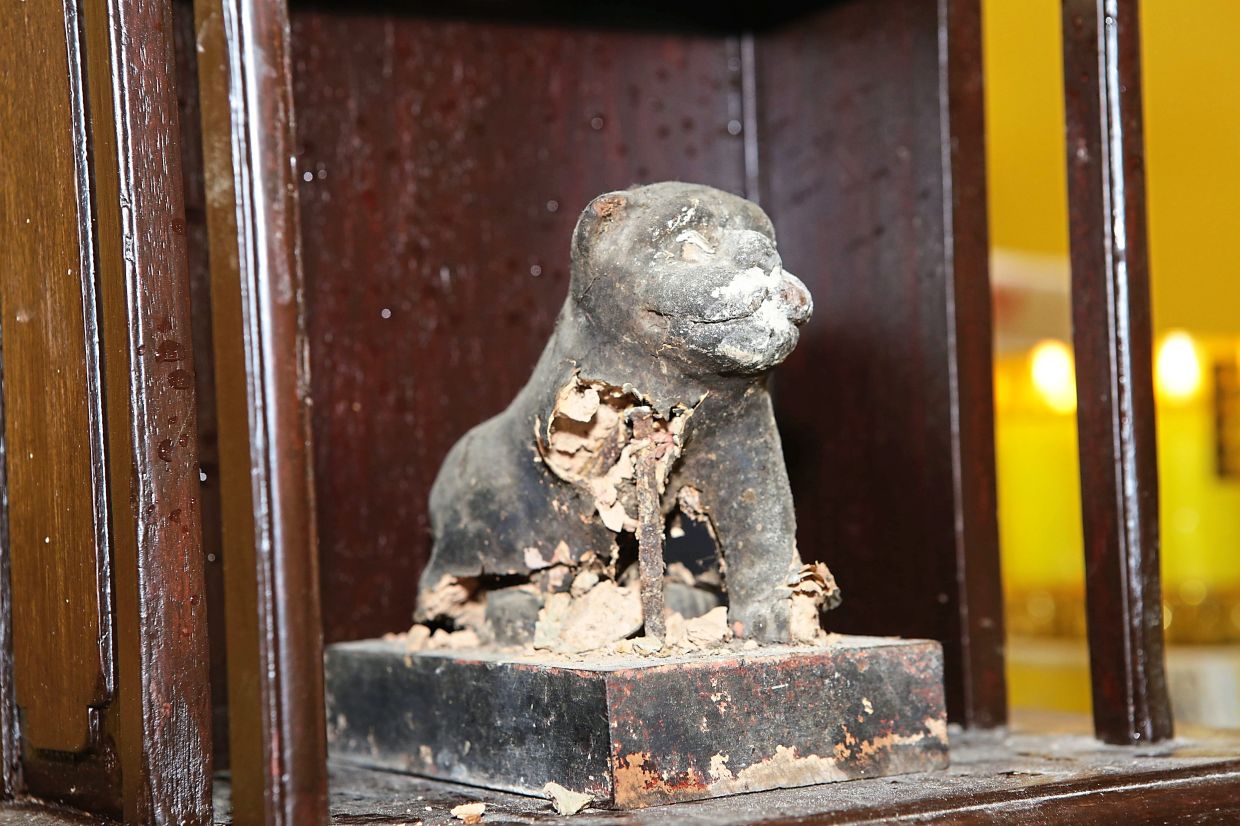 The old figurine (inset) is sent for restoration at Tow Boh Keong Temple in George Town.“The element of water was used to combine the parts, and the element of fire is represented by an oil lamp wick for the tail,” he added.

Khoo said the Senior General Black Tiger was a sacred animal of the Nine Emperor Gods.

“It was originally placed at the right of the altar inside the temple’s inner chamber until my late grandfather, Khoo Thye Toon (1844–1903), passed away.

“When my late father, Khoo Swee Eng (1880-1952), took over the abbot position, he placed it beneath the altar in the main chamber as a protector should not be placed deep within the temple,” he said.

He said the Senior General Black Tiger was tasked with protecting the temple, dispelling evil spirits, curing illnesses, and bestowing wealth and prosperity.

“The Tiger Lord is non-vegetarian, but Senior General Black Tiger here is. We usually offer water as it doesn’t drink tea and eats fruit with five vegetarian dishes during the Nine Emperor Gods’ birthday celebration,” he said.

The new figurine for this deity is carved out of camphorwood.

Among those at the consecration ceremony were temple trustee Datuk Seri Choot Ewe Seng and Komtar assemblyman Teh Lai Heng.

“Worship was imported from South China to South-East Asia by immigrants who settled here, but the original form of worship once practised is no longer found here.

“Here, it implies the rediscovery, confirmation, emphasis, or enhancement of the ethnic Chinese identity.

“In Penang, the festival is celebrated moderately compared with in Phuket, Thailand, where it is highly commercialised, while in Singapore, it is tightly regulated by the government,” he said.

Hiroshi said the Nine Emperor Gods Festival was celebrated alongside Navarathiri by Hindus to honour the Mother Goddess, which also involves vegetarianism and lasts nine days.

Temple chairman M. Patmanathan, 67, said after two years of muted celebrations due to the Covid-19 pandemic, the festival was finally held again just as in the pre-pandemic days.

“For the past two years, prayers were only broadcast live online, and only a small number of people were allowed to be at places of worship. Devotees will observe a vegetarian diet for nine days, and we will have prayers from 7pm to 9pm during the festival.

“We will have cultural dance performances every night. On the eleventh day, we will have a chariot procession,” he said.