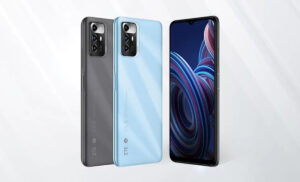 Those looking for a mid-range 5G-equipped smartphone may want to consider ZTE’s latest offering for the Malaysian market. Just recently listed on the company‘s official store on Shopee and Lazada is the new ZTE Blade A72 5G, which sports a budget-friendly price point of below RM 1,000.

Unlike the standard version, the ZTE Blade A72 5G features a smaller 6.52-inch LCD display with a waterdrop notch, 900 x 1600 pixel resolution, and a refresh rate of 90Hz. Also onboard is a side-mounted fingerprint scanner, a USB-C port for charging and data transfer, and a 3.5mm headphone jack.

As for its internals, the 5G-variant packs a MediaTek Dimensity 700 chipset, a Mail-G57 MC2 GPU, as well as a single memory configuration of 4GB of RAM and 64GB of internal storage. As with most smartphones of its class, the Blade A72 5G features virtual memory conversion as well, though only limited to an additional 2GB of RAM. Additionally, it also comes with the storage expansion of up to 1TB via microSD.

While the standard model came with a massive 6,000 mAh battery, the same cannot be said for the 5G variant. According to its listing on ZTE’s official store on Shopee, the Blade A72 5G comes with a somewhat disappointing capacity of only 4,000 mAh. The phone does feature fast charging, though the exact rate isn’t provided by the company.

Imaging-wise, the new ZTE mid-ranger sports the same triple camera setup as the non-5G variant. To be more specific, on its back is a 13MP primary shooter, which is paired together with two 2MP sensors for its macro and depth cameras. Meanwhile, housed within the waterdrop notch on its display is a 5MP selfie camera.

As mentioned earlier, the ZTE Blade A72 5G is available via the brand’s official online stores on Lazada and Shopee. It is available in either grey or blue colour options, and is priced at RM 849. Based on the listings, the phone is expected to ship out to customers from 30 August 2022 onwards.