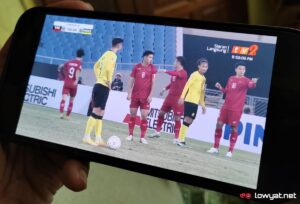 The national broadcaster RTM will begin to broadcast matches from the ASEAN Football Federation (AFF) Mitsubishi Cup 2022 starting tonight. The announcement took place just a few hours ago, ahead of Malaysia’s match against Vietnam that is taking place at My Dinh National Stadium in Hanoi.

With Thailand being the defending champion, the 14th edition of the regional football tournament is available only through Astro in Malaysia prior to the announcement by the Communications and Digital Minister, Fahmi Fadzil. The minister noted that many local fans have requested RTM to broadcast the tournament which has also been suggested by Youth and Sports Minister, Hannah Yeoh.

Under the arrangement by RTM, fans will be able to catch a total of 10 matches from the AFF Mitsubishi Cup through two channels including TV2 and Sukan RTM. At the same time, these matches will also be shown through the broadcaster’s online streaming platform, RTMKlik.

Despite the good news for those who want to check out the event without going through the paid premium route, fans have to make do with one minor disadvantage though: the broadcast on RTM will not take place at the actual kick-off time. Fahmi pointed out that the delay is due to the terms inside the broadcast contract which stipulated that Free-To-Air broadcasters such as RTM are only able to show the match 15 minutes after it started.

Meanwhile, Harimau Malaya who was the champion of the 2010’s edition is having a positive campaign so far as the national team has won its first match against Myanmar on 21 December with a score of 0 – 1. The team then went on to beat Laos with a significant margin of 5 – 0 just three days ago in front of the home crowd at the Bukit Jalil National Stadium.

Only two teams from each group will qualify for the next stage though. As each group contains five teams, Harimau Malaya still needs to be wary of the challenges up ahead even though it might be in a comfortable position at the moment.

The post You Can Now Watch AFF Mitsubishi Electric Cup For Free In Malaysia Via RTM appeared first on Lowyat.NET.