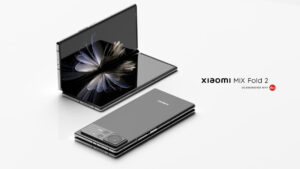 Just a day after Samsung launched the Galaxy Z Fold4, Xiaomi came out with its own new foldable, the Mix Fold 2. The second-generation device looks to be head and shoulders above its predecessor, with a more sleeker design and bleeding edge specs, as well as a lower price tag than its main competitor.

When folded, the exterior of the Mix Fold 2 sports a 21:9 6.56-inch AMOLED display with a 120Hz refresh rate and Gorilla Glass Victus for protection. When in its unfolded form, the inner display contains an 8-inch 120Hz LTPO2 OLED panel with a peak brightness of 1,300 nits. Impressively, the foldable is only 5.4mm folded and 11.2mm when unfolded, with the company comparing the thinness to an iPhone 13 Pro Max.

Putting aside the improved form factor, the foldable also runs on powerful internals including the top-shelf Qualcomm Snapdragon 8 Plus Gen 1 chipset, along with 12GB of RAM and up to 1TB of storage. It also supports Bluetooth 5.2, NFC, Wi-Fi 6E, an under-display fingerprint scanner, and an IR blaster.

The Mix Fold 2 seems to be no slouch when it comes to photography either as the camera module was tuned by Leica, being Xiaomi’s first device after the 12S series to carry the branding. The trifecta of cameras contains a 50MP main shooter, a 13MP ultrawide, and an 8MP telephoto with 2x optical zoom. Unlike the Fold4, the inner display of Xiaomi’s foldable does not have a selfie camera but instead, there is a 20MP sensor on the cover screen.

The tech giant fitted the new foldable with a 4,500mAh battery with support for 67W wired charging, though the high-end device notably lacks wireless charging. The phone is shipping with MIUI Fold 13 based on Android 12 and comes in black and gold colourways.