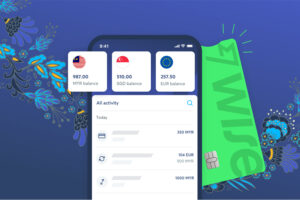 Money transfer firm Wise has launched a new multi-currency account and card that lets users hold up to 54 foreign currencies at the same time for spending and transferring. The account lets you convert currencies at the real market rate with no exchange rate markups.

According to Wise, Malaysians spent over RM10.5 billion in card fees when shopping overseas between 2015 and 2020. Each year, an average of RM1.5 billion of those fees were made up of hidden transaction fees and exchange rate markups. Wise says that with its service, users will be able to save money as it doesn’t charge these unnecessary fees.

Wise claims that its multi-currency account is the first to offer conversions at the real exchange rate with no foreign transfer fees to more than 200 countries and territories. The accompanying prepaid card that comes with the account also has an auto-conversion feature that chooses the cheapest possible currency to convert money from when using the card.

Moreover, you’ll also be able to receive money from 10 currencies like a local would. You can do so for the Malaysian Ringgit, British pound, Euro, US Dollar, Australian Dollar, New Zealand Dollar, Singapore Dollar, Canadian Dollar, Hungarian Forint, and the Turkish Lira. Once you verify your ID and make a deposit of RM101, you can get local account details for any of these currencies, such as account numbers and bank codes.

The prepaid card is free until 1 January 2022, after which, it will cost RM13.70. The card allows two free local ATM withdrawals per month up to RM1000. Subsequent withdrawals have a RM5 fee and you will also get charged 1.75% of each withdrawal after going over the monthly RM1000 cumulative limit.

Update: Wise has updated the price of the prepaid card to RM13.70. It was previously RM14.52. The article has been updated to reflect this change.