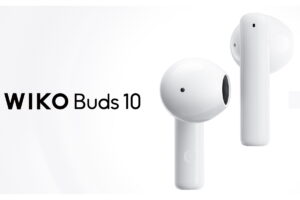 The French brand Wiko made a return to Malaysia back in August with two smartphone models. The company has since increased its phone line-up on our shores to three models and has also recently launched true wireless earbuds (TWEs) for the budget segment of the market called Wiko Buds 10.

Based on the official product image, it is not hard to guess where the design inspiration for Buds 10 came from. This is regardless of the earbuds themselves or the charging case but then again, having an original design is usually not a big focus for budget TWEs.

According to Wiko, each of the 4.2g Bluetooth 5.2 earbuds has been equipped with 12mm bio-diaphragm dynamic drivers alongside copper-coated aluminium armature. Together with the ability to connect to two devices simultaneously, they also come with an IPX4 water resistance rating and dual microphone setup that includes noise cancellation capability to help deliver clearer voice calls.

Meanwhile, the touch sensors on the Buds 10 allow users to answer or reject phone calls as well as to control music playback. The sensors can also be used to activate voice assistant in addition to the ability to switch between gaming and normal listening mode.

One of the Buds 10’s much-touted features is its battery life which can go up to 30 hours through the 500mAh battery inside the TWEs charging case. The earbuds themselves have a 40mAh battery each that can deliver operational time of up to six hours.

Wiko noted that it takes around one hour for the charging case to fully charge the earbuds while the case itself also requires one hour of charging time to gain back its full capacity. Users can also tweak the sound output by choosing one of the several presets in the Wiko Connect App’s equalizer although this app is only available for Android at the moment.

Of course, the biggest attraction of the new TWEs to some users would be their price tag. Available from Wiko dealers all over Malaysia, the new Wiko Buds 10 can be obtained for just RM 129.