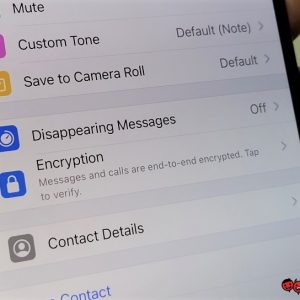 In the latest WhatsApp beta news, the messaging platform seems to be working on a feature that will let users “keep” disappearing messages. This means that people who receive these messages can save them even though they were intended to be deleted by the sender, possibly reducing the peace-of-mind aspect of the disappearing messages feature.

A preview of the tool was first discovered in the app’s Android beta back in March but has since been spotted in the iOS beta and now, the desktop beta. This could mean that WhatsApp is moving forward with the feature and users can expect to eventually see a wider rollout in the future.

According to the ever-reliable WABetaInfo, any kept messages will be saved in a new section under Contact Info and Group Info. However, when someone keeps a disappearing message to prevent it from being deleted after the expiration date, everyone will be notified and anyone can “unkeep” it, deleting the affected message.

Initially, you could only set disappearing messages to individual groups or contacts and were only limited to a seven-day timer. But a few months ago, WhatsApp rolled out a global timer that allowed users to set all messages to delete themselves by default with duration options of 24 hours, seven days, or 90 days.

Of course, while this does not prevent recipients from taking a screenshot of a conversation, it at least clears up any unimportant messages cluttering your phone.  WhatsApp also launched a feature called View Once that lets users send pictures that disappear after being viewed by the recipient, which is especially useful for sending information that you wouldn’t want to be passed around like your Wi-Fi password.

Aside from this chat-saving feature, WhatsApp has a lot of irons in the fire such as silent group exits, chat filtering, and a companion mode. The platform has also recently rolled out emoji reactions and Communities, as well as several voice chat improvements.

The post WhatsApp To Let Users Save Disappearing Messages appeared first on Lowyat.NET.