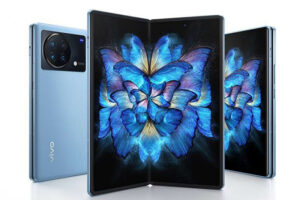 To make using all sides of the X Fold more convenient, vivo has also fitted an ultrasonic fingerprint scanner on both displays. Not to forget, the hinge on the device is certified to last up to 300,000 folds.

Under the hood, it is powered by the latest flagship chip from Qualcomm, the Snapdragon 8 Gen 1 and comes with 12GB of RAM as standard with up to 512GB of storage with no microSD slot. The vivo X Fold runs on a 4,600mAh battery and is capable of 66W wired charging, 50W wireless charging, and 10W reverse wireless charging.

On the back, the phone is equipped with a quad-camera setup that includes optics by ZEISS, a 50MP main sensor, a 48MP ultra-wide camera, an 8MP periscope telephoto lens, and another 12MP telephoto camera. There are also two 16MP punch-hole selfie cameras which are located on the right side of the folding display and the top centre part of the external display.

As for connectivity, the foldable supports 5G, Wi-Fi 6, Bluetooth 5.2 and NFC. Comes pre-installed with vivo’s OriginOS Ocean which is based on Android 12, X Fold is equipped with stereo speakers but lacks a 3.5mm audio jack.

Available in blue and black colourways, the vivo X Fold costs CNY8,999 (~RM5,979) for the 256GB model and CNY9,999 (~RM6,643) for the 512GB version. It will be sold exclusively in China for the time being and the company has not yet announced any plans to launch it in international markets.