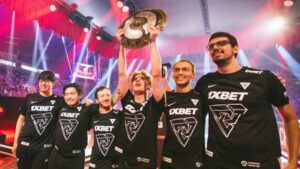 The grand finals for The International 2022, or TI 11, took place over the weekend down south in Singapore. The biggest Dota 2 event of every year is usually also the esports event with the largest prize pool, but this year’s edition didn’t quite keep up its own trend of continuous prize pool growth. Either way, this year, tourney still saw nearly US$19 million getting pooled. And UK-based Tundra Esports claimed the biggest chunk, at almost US$8.5 million, for taking first place.

The team won pretty convincingly as well, sweeping fellow top contender Team Secret 3-0. Throughout the three matches, Tundra showed off their wide hero pool, which gave them the upper hand against the opponent’s picks and bans in the drafting phases.

As ONE Esports reports, this win for Tundra is also a significant milestone for a number of the team’s players. For midlaner Leon “Nine” Kirilin and carry  Oliver “skiter” Lepko, winning TI 11 made them “royal roaders”, or players who took the top spot in their first The International Entry. This is also the second time where The International grand final ended in a clean sweep, with the last one happening back in TI 7.

Beyond the esports side of things, Valve also took the opportunity to announce a new Hero character for Dota 2. Known as Muerta, the character takes obvious inspiration from the Mexican Day of the Dead celebration, which is fitting considering the proximity of both the celebration and The International 2022 tourney to Halloween. For context, Day of the Dead is traditionally celebrated on 1 and 2 November.

Beyond her visuals and name, not much else is known about Muerta, so it’s unclear as to what her character archetype or role will be like in Dota 2. But for what it’s worth, Valve says that she will be released in early 2023, and the company is likely to drip feed more information on her in the meantime.