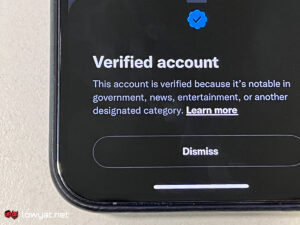 A tweet posted by an account impersonating Prime Minister Anwar Ibrahim had been making rounds on Twitter earlier this morning before it was declared fake by the Prime Minister’s Department (JPM). What’s even more alarming, based on the screenshot featuring the now-deleted tweet shared by the department, is the fact that the account featured the platform’s iconic “Blue Tick” verification badge.

The impostor used the same username and profile photo as Anwar Ibrahim’s official account, with the only difference being its handle: @anwarinrahim, which is potentially deceiving at first glance. The account has now been suspended by Twitter not long after JPM released a statement warning users of the illegitimate posting. It is unclear whether the platform took action on its own accord, or was instructed by the department.

As for the tweet itself, the fake account wrote: “The recognition of UEC (United Examination Certificate) will be discussed on the ministry level and this motion will be approved by the unity government in the future, in line with the Pakatan Harapan manifesto.” For the uninitiated, UEC is a certificate issued to students who completed studies at Chinese independent high schools, which is recognised by certain private institutions and universities but not officially regulated or recognised by the Malaysian Ministry of Education. In short, the account was used to spread false information to the public, with clear intentions of riling up controversy and confusion.

However, it seems that Twitter could no longer become a reliable source for genuine information in the long run. This is especially given the fact that the platform’s iconic verification badge now serves to indicate subscribers of its premium Twitter Blue plan, rather than a proof of authentication for public figures or publications. Of course, this benefit has been greatly abused by trolls and scammers alike to deceive the public with misinformation under the guise of a high-profile figure or entity – a scenario which Malaysia has now experienced firsthand from today’s incident.

With a chaotic relaunch and very little effort to differentiate between fake accounts (or “parody accounts”, as Twitter owner Elon Musk puts it) and the real ones, anyone and everyone can impersonate a reputable individual or brand by just spending US$ 8 (~RM 35) to get the Blue Tick which, by the way, is still an effective way to deceive unsuspecting Twitter. After all, the badge has always been closely associated with verified accounts prior to the platform’s major change in direction, therefore the familiarity of seeing it beside any username would easily give bogus accounts a free pass for authenticity.

But as pointed out by JPM, users could prevent from getting deceived by impostors by paying attention to the finer details, where in this case being the fake account’s handle. While the advice itself is sound, there’s one underlying problem: this is Twitter we’re talking about, where a majority of posts are often taken at face value.

That being said, you can safely rule out the chances of most users actually putting an effort to distinguish fake accounts from real ones by carefully examining the handles for any discrepancies. Sure, the rework has introduced a supporting badge below the username and handle to further validate an account’s authenticity, but this solution is yet another fine detail that a lot of Twitter users have yet to familiarise with.

Fortunately, this isn’t the case for other social media platforms such as Facebook and Instagram, as their proofs of verification are only handed out limitedly to validated accounts of high-profile individuals, brands, and publications. Maybe by adapting a similar approach could have prevented Twitter from experiencing this issue altogether?

Oh, wait. It actually had that before.

However, as most of us are aware by now, a certain billionaire bought the social media giant and decided to change things up. Now, this kind of makes you wonder if the literal sink Elon had brought over to Twitter HQ was actually foreshadowing of some kind, doesn’t it?

The post Twitter’s US$ 8 Verification Badges Now Officially A Concern For Malaysia appeared first on Lowyat.NET.