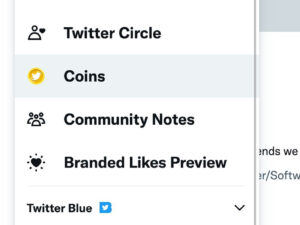 Twitter is rumoured to be working on adding even more features to its platform; the work will reportedly revolve around an in-app currency called “Coins”. App researcher Niwa Owji uncovered the development of Coins back in December but has recently found that the feature has progressed to potentially being added to the app’s navigation menu.

Security researcher Jane Manchun Wong also found a purchasing screen for Coins, detailing that the currency will allow you to support creators. From the looks of it, it seems awfully similar to the function served by Twitter’s existing Tip Jar feature, which lets users tip creators with cash or cryptocurrency.

Wong found that the purchase of Coins will be done through Stripe, with Owji confirming that the feature seems to have no connection to crypto as of now. From Owji’s screenshots, it seems creators will be able to earn from both Subscriptions and Coins received as tips.

What’s even more interesting about this development is that earlier this month, Wong discovered a list of “awards” that Twitter seems to be working on. While it’s not official yet, it is speculated that the awards will be able to be purchased using Coins, which will then enable you to gift them to creators of your choice.

On the creator side, the payout for the awards will be done in regular FIAT currency, with a minimum payout of US$50 (~RM218). The exchange rate between the platform’s Coins and the US Dollar is still unclear but given the awards feature to be in development since last March (before Elon Musk took over the company), it shouldn’t be that long before Twitter officially launches it.

Another source of revenue that Twitter is considering might be through the auctioning of usernames, according to a New York Times report. While it has apparently been discussed, the article says it is still uncertain if the company will go through with it. Ironically, the platform’s own policy currently forbids the buying and selling of usernames.