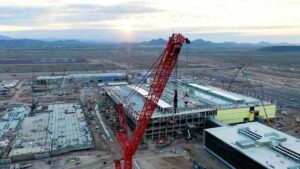 TSMC says that the construction of the second fab will also provide jobs for more than 10000 construction workers, along with an additional 10000 high-paying high-tech jobs, 4500 of which will be direct jobs from the company itself. In total, the semiconductor company will also be investing around US$40 billion (~RM176 billion), making it the most significant foreign direct investment in the state’s history.

“When complete, TSMC Arizona aims to be the greenest semiconductor manufacturing facility in the United States producing the most advanced semiconductor process technology in the country, enabling next-generation high-performance and low-power computing products for years to come,” Dr. Mark Liu, TSMC Chairman, said. “We are thankful for the continued collaboration that has brought us here and is pleased to work with our partners in the United States to serve as a base for semiconductor innovation.”

Once completed, both of TSMC’s fabs will be able to manufacture over 600000 wafers per year, with an estimated end-product value of more than US$40 billion (~RM176 billion). The first fab itself, which went into construction back in 2020, will have a production capacity of 240000 wafers a year and is where not only the N4 process will be conducted, but also N4P and N4X.

The announcement marks a shift in the global manufacturing supply chain, due in no small part to the ongoing economic conflict between the US and China. Because of sanctions and restrictions put in place by both economic powerhouses, tech giants and manufacturers have had little or no choice but to shift their factories and manufacturing plants out of the latter country, TSMC being one such entity.

Of course, TSMC isn’t the only manufacturer and chipmaker to establish a presence in the US. Last year, Samsung announced that it would be opening a new semiconductor plant in the state of Texas, to the tune of US$17 billion (~RM75 billion).

The post TSMC Is Building A Second Fab In Arizona appeared first on Lowyat.NET.