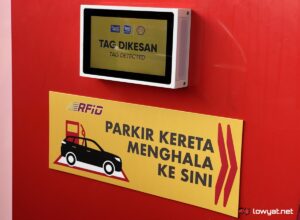 You may have heard about it, seen it, or even actively used the feature at your favourite Shell station. However, it was only earlier this week that Shell Malaysia and Touch ‘n Go officially launched the RFID Fuelling option.

The official launch is a long time coming given how it was first unveiled to the world way back in early February 2020. Just two weeks after the plan was revealed to the public, TNG then announced that it has managed to get Shell onboard.

The actual trial program only started more than a year later in July 2021 at five selected stations within Klang Valley. Fast forward to late May 2022, the number of stations that offer the payment feature grew to 35 although their whereabouts are still limited to Klang Valley.

During this week’s launch event, TNG and Shell announced that the RFID Fuelling option is now readily available in 88 stations across Peninsular Malaysia. Additionally, they plan to rapidly expand its availability in the next four months as they aim to have RFID Fuelling in 200 stations all over the country by the end of this year.

In a response to Lowyat.NET regarding the lengthy trial period, TNG’s Group CEO Effendy Shahul Hamid said that they took a lot of time calibrating the solution and making sure that everything is right including the software, systems, and customers’ experience. Seow Lee Ming, Shell’s General Manager of Mobility for Malaysia and Singapore added that they don’t want to launch it without having a seamless experience and impact for users.

“When we do the testing for one year, we just started with five sites and 10,000 users for the pilot, we want to perfect it, make sure we understand the site layout, the traffic flow, and also the positioning of the (RFID) readers as well,” added Lee Ming.

In another response during the media Q&A session, she also pointed out that the current focus is to enable the RFID option in more stations first. Shell does have a plan to increase the number of RFID bay from two per station to five or even more if the uptake, adoption rate, and traffic flow is good.

To mark the official rollout of the RFID Fuelling, Shell and TNG are now offering RM10 cashback to the first 25,000 users that utilize the option to purchase at least RM50 worth of fuel. However, this offer is only valid for users using the RFID Fuelling feature for the first time.