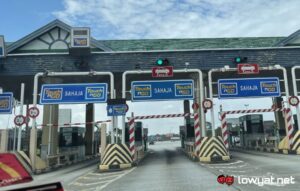 Works Minister Fadillah Yusof has revealed that toll payments through Touch ‘n Go (TnG) card will be discontinued in 2025. This is because highway operators have been asked to deploy the multi-lane free flow (MLFF) system by that very year.

Through the MLFF system which utilises Automated Number Plate Recognition (ANPR) and will feature no barriers, users will be able to pay for their tolls via multiple options of payment providers according to the minister who has made the revelation via an interview with Free Malaysia Today.

Fadillah added that the payment option could be TnG e-Wallet, debit/credit card, or other digital payment options as long as they are supported by respective highway operators. Regardless of customers preferred payment option, all they need is just one RFID tag on their vehicle.

The minister also noted that the SmartTAG lane will also be phased out in stages although no exact timeline was mentioned in the interview. The Ministry of Works last month has already announced a similar move for PLUS highway last month although the highway operator has decided to reopened 43 SmartTAG lanes at 40 toll plazas starting from today due to demand from users.

In many ways, the revelation today reminds us of what PLUS tried to do in 2018 although, at that time, the company was trying to deploy its own RFID system. It then led to a massive dispute between PLUS and TnG’s parent company, CIMB Group which eventually was settled out of the court.