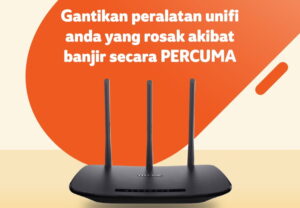 TM has announced that it will replace any Customer Premises Equipment (CPE) for unifi services that have been damaged by flood without any charges. According to unifi’s FAQ dated June 2021 [pdf], the equipment set provided for unifi Home Fibre customers is valued at approximately RM1,000.

While the equipment set may vary from one home to another, unifi Home customers would usually receive a Broadband Termination Unit (BTU) which is generally referred to as a modem by most users, alongside a Wi-Fi router. Some customers especially those on older unifi plans may have obtained a DECT phone as well as an unifi TV set-top box.

In its announcement, TM didn’t specify which of these devices are being considered as the CPE that is eligible for the free replacement program. That being said, we believe that at least the BTU and Wi-Fi router should be part of it given that customers need both of these devices in order to have Internet at their home through unifi.

Meanwhile, TM has said that customers can reach out to its customer service hotline by calling 100 or utilize the Live Chat function on unifi’s website to arrange the replacement for their flood-damaged CPE. Be wary that the waiting time could be quite long given the number of people that have been affected by the flood.

The post TM To Replace Flood-Damaged unifi Modem and Router For Free appeared first on Lowyat.NET.