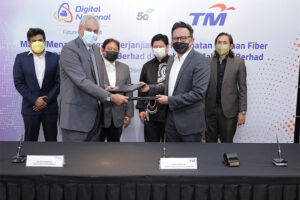 Telekom Malaysia (TM) has announced that it has signed a leasing deal with Digital National Berhad (DNB) to enable the Special Purpose Vehicle (SPV) to use the former’s fibre and network infrastructure for rolling out 5G services nationwide. TM will provide DNB with 5G fibre leasing services for connectivity between DNB’s 5G mobile sites and nodes, leveraging on TM’s domestic fibre cable network that spans over 640,000km across Malaysia.

The contract, which sees DNB subscribing to TM’s 5G RAN-to-Edge Fronthaul and Backhaul solution for the provision of fibre connectivity, is worth RM2 billion over ten years. Critical in executing this mission is to ensure our network is robust to support the future requirements of 5G and further fuel technological innovation in Malaysia,” said Imri Mokhtar, Group Chief Executive Officer of TM.

According to TM, it had participated with other network providers in the 5G Fiber Leasing Request for Quotation (RFQ) exercise conducted by DNB in June 2021. So far, the state-owned firm is the only network provider to sign an agreement with DNB.

DNB has officially deployed Malaysia’s 5G network, starting in Klang Valley with a limited list of supported devices. First to bring 5G into customers’ hands is the Yes telco by YTL Communications, though TM’s unifi has also announced that it will also be bringing 5G services soon to postpaid customers.