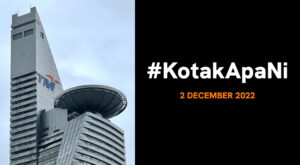 TM earlier today published a teaser on unifi’s Facebook page and Twitter which seems to be hinting at a brand-new device or service. Aside from having #KotakApaNi as its hashtag and 2 December 2022 as its reveal date, the teaser didn’t provide any clear indication of what exactly the company intend to announce next month.

Given the hashtag as well as TM’s nature as an Internet Service Provider and IPTV operator, we believe that the teaser may lead to the launch of a 5G fixed wireless access (FWA) service by unifi. This is because even though TM enabled 5G access to unifi Mobile customers in late October, it is still limited to smartphone users for now.

Those who want to obtain wireless broadband service from TM at the moment have only one option which is the LTE-based unifi Air. As the service was originally launched back in 2019 and still retained its original pricing of RM79 per month until today, we reckoned that unifi Air is ripe for a refresh.

While we have also included the IPTV box in our consideration, the timing might not be suitable though because the company has just rolled out the unifi Plus Box back in May. The same also holds true for Wi-Fi 6 routers as they have just been deployed by TM to its customers from June onwards.

So, we are back to square one with a 5G FWA service remaining as our prime suspect. After all, the 5G FWA market in Malaysia is still wide open as the only local telco that has offered such service so far is YTL Communications via its Yes Wireless Fibre 5G plan which was just launched two months ago.

Of course, our predictions here could go off-target altogether. Regardless of that, we really hope that we will see an actual device or service from TM this coming December and not face the repeat of Bawang 2018 disappointment all over again.

The post TM Latest Teaser Might Be Hinting At A New Box For unifi appeared first on Lowyat.NET.