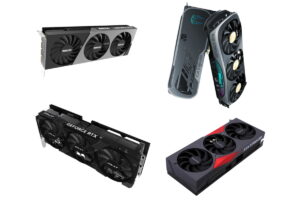 NVIDIA has officially launched the GeForce RTX 4070 Ti graphics card as part of its CES 2023 outing last week. The global rollout took place just a few days after the official announcement and quite a number of manufacturers have since made the new card available in Malaysia as well.

As noted in our previous report, the official NVIDIA GeForce website for Malaysia has listed the starting retail price for the RTX 4070 Ti as RM4,150. Interestingly enough, some of these cards carry a much lower price tag.

Based on our survey, the most affordable RTX 4070 Ti card in the market at the moment is the Colorful NB EX-V which costs RM3,959 at NVIDIA GeForce’s official store at Shopee. It is then followed closely by the ZOTAC Gaming Trinity which is priced at RM3,999 according to ZOTAC Malaysia.

For an additional RM100, you can get your hands on the overclocked version of the Zotac Gaming RTX 4070 Ti Trinity that has a slightly higher clock speed of 2,625MHz instead of the standard 2,610MHz. Aside from that, both versions are generally identical to each other.

Next on the list is the PNY Verto TF which is one of the two RTX 4070 Ti cards that the brand has released in Malaysia. Available for RM4,149, not only that the card is just RM1 short of NVIDIA’s starting list price but it is also RM340 less than the other PNY RTX 4070 Ti card which is an XLR8 Gaming Verto EPIC-X RGB TF OC release.

Another RTX 4070 Ti card that is available for RM1 less than NVIDIA’s starting price is the non-OC variant of the INNO3D X3 via the brand’s official Shopee store. Just for the sake of it, we would also like to highlight two cards that you can obtain at exactly NVIDIA’s list price of RM4,150: the non-OC ASUS TUF Gaming and the MSI Ventus 3X.

To recap, you may be able to save up to RM191 if you choose to obtain these RTX 4070 Ti cards although do note that almost all of them are generally the base model for their respective manufacturers. It also goes without saying that the pricing of these cards is still much higher than NVIDIA’s list price for the United States which is USD799 (~RM3,466).

Nevertheless, we do recommend you reach out to your favourite PC hardware retailers for more information regarding actual in-store availability. The street price for these cards also may vary from one retailer to another, so it is possible that some of them are able to offer a better deal than what we have listed above.

The post These GeForce RTX 4070 Ti Cards Are Available At Below NVIDIA Malaysia’s Starting Price appeared first on Lowyat.NET.