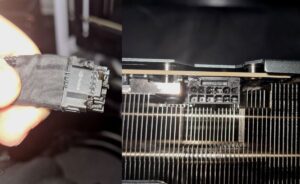 Earlier in September, reports about NVIDIA’s new 16-pin PCIe Gen5 connector only lasting 40 connection cycles, at most, began making their way online, and how it had the potential of becoming a fire hazard. Well, it seems that was a foreshadowing and the point has come home to roost with not one, but two owners of the GeForce RTX 4090.

Two unfortunate Redditors, reggie_gakil and NoDuelsPolicyy, posted images of the 16-pin connectors, or known as the 12VHPWR connectors, in a melted and unusable condition. Unsurprisingly, their RTX 4090 GPUs were clearly unwitting victims in the meltdown, with all fingers being pointed toward NVIDIA’s 600W-capable cable.

For Reggie, they reported that their RTX 4090 had caught fire and that they could smell the smoke from the system. For Duel, their issue was less hazardous and only discovered that their card was a casualty after disassembling the system and finding out that their 16-pin had melted, likely due to the surge in power flowing through the cable.

The irony to both Reggie and Duels’ predicament is that it was NVIDIA who initially warned PCI-SIG – that’s the governing body behind the PCIe specifications that we use today – about a “thermal variance” issue regarding the new 16-pin power adapters and standard. Specifically, the GPU company concluded that severe bending of the cables or even exceeding the connection cycle limits that we mentioned at the start of the article would result in the situation that both Redditors had the misfortune of going through and, as a result, leading to the death of their expensive Lovelace-powered graphics cards.

The 16-pin conundrum notwithstanding, this isn’t the first time NVIDIA has come under fire (no pun intended) over its products. For those of you that remember, the company came under fire when it was discovered that it was actually limiting the graphics memory of its Maxwell-based graphics card, the GTX 970, to 3.5GB from the original 4GB. There’s also the issue with its last generation Ampere architecture, when word got out that certain RTX 3080 cards were crashing due to faulty capacitors in the initial stages.

Here’s to hoping that NVIDIA will nip 16-pin burnout issue in the bud, before it spreads about like wildfire.

The post The First Cases Of NVIDIA’s GeForce RTX 4090 And Melted 16-Pin Connectors Are Coming In appeared first on Lowyat.NET.