Back in April, 3D renders of the alleged Sony WH-1000XM5 ANC headphones leaked, giving us a first glimpse at the Japanese electronic giant’s follow-up to 2020’s 1000XM4. Now, leaked images of the headphones’ packaging are appearing, further confirming its design.

Pictures of the 1000XM5’s packaging first appeared on Reddit and covered the front, top, and back of the headphones’ box. More importantly, the top of the box’s recycled paper wrapper also debunks the initial rumour of the headphone’s battery life being extended to 50 hours; the headphones will only have a battery life of 30 hours, which is 10 hours less than the 1000XM4’s 40 hours. 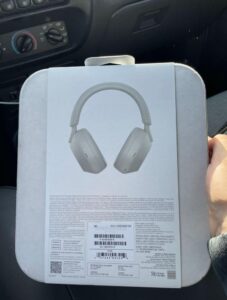 However, there is speculation online that the 1000XM5’s overall battery life could actually be extended closer to 40 hours threshold, simply by switching over to a more power-efficient audio codec.

At the time of writing, there is still no word when exactly the WH-1000XM5 will be launching, while Sony has also been keeping mum on the subject. Having said that and considering that the leaks have been happening in such close intervals, as well as the fact that the WH-1000XM4 launched around this time back in 2020, it’s not wrong to say that the launch period is imminent and only a matter of time.