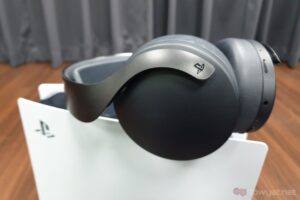 Gaming consoles usually make use of any pair of headsets you have at your disposal, for times when you want to keep all your in-game sounds to yourself. But that hasn’t stopped console makers from making headsets designed specifically to be used with them. Sony Interactive Entertainment previously had the original Pulse wireless headset. Now, the company has the Pulse 3D headset for the PS5.

Back in October, the company announced the Midnight Black colourway of the headset, and this is the subject of our review.

As mentioned, the Sony Pulse 3D is a wireless headset that’s made specifically with the PS5 in mind. Of course, it can still be used with any other device that supports it. But things can be challenging since the wireless portion works using a 2.4GHz dongle. And in case you’re wondering: No, there is no Bluetooth connectivity to your phone, if that is what you are hoping for that. Believe me, it was what I wanted until I tried it out, but more on the wireless connectivity in a bit.

Compared to other conventional headsets, These ones leans towards the side of being quite light. No real surprise, since on the outside, the only material you see is plastic, plus some rubber and faux leather. All of its controls, as well as the integrated mic, are on the left cup. And it is surprisingly feature-rich. On the top side of both cans are what appear to be ports, making it a semi-open pair of cans.

It all depends, really. Is your head the perfect size? I jest, but in all seriousness, your experience with the Sony Pulse 3D will really depend on the size of your head and ears. On my head, it felt fine, and it would be after long gaming hours before I felt it pinching my skull in. But on the head of my colleague, he felt the pinch almost immediately and found that the cups were pushing his ear into his head. So as you can tell, it’s quite a mixed bag in this regard.

I mentioned the feature-rich controls on the left cup. And for the most part, there’s so much going on here that you’d think you had all your Discord shortcuts on the Pulse 3D headset.

Going in order, there’s the power switch, the 3.5mm audio jack, the USB-C charging port, the mute button, the volume rocker, the mic monitoring’s mute switch, and finally the game and audio volume rocker. That last one lets you adjust the volume balance between the game sounds and your voice chat.

These are all really great features to have but as with all things in life, there are a few major caveats that accompany the headset. One glaring flaw is that only half of these work when you are using the Pulse 3D with a PlayStation console with the 2.4GHz wireless dongle. Specifically, the two rockers will only work when connected this way. You can use the dongle with a PC, but the volume button does nothing and you have to adjust the volume manually on your PC. The same goes for the game and voice volume; you’ll have to make the adjustments on your voice chat software, like the aforementioned Discord.

The Sound Quality. Talk To Me.

Being a pair of headphones designed and built specifically for video games, the Sony Pulse 3D has a certain character to it when you use it for regular music listening. Vocals are quite clearly the strong point of this headset, be it when using voice chat, listening to in-game dialogue, or when you’re just listening to tracks where vocals are the main focus.

The next best thing about the headset, though, is the sound staging. Again, this strong point may have something to do with the fact that the Sony Pulse 3D was made for the PS5, but it does this very well. This is especially true for games where that is important, like when you’re actively listening for the footsteps of approaching enemies in Call of Duty Warzone. In-game, you can tell precisely where each sound is coming from, and to a lesser extent the distance as well. It’s also an added bonus that this bleeds through to the regular music listening experience. Though when things get too hectic, the vocals tend to overpower everything else, spoiling this plus point.

Another plus point is bass. Or more specifically, bass guitar. It’s a little weird that this difference exists, so much so that such a distinction is necessary, but here we are. Take the song Stayin’ Alive by the Bee Gees for example – the strings here are clean and crisp. But when it comes to synth bass-heavy tracks like Daichi Miura’s Blizzard, you get echoes that make things sound hollow. The same for sound effects, from the buffeting winds to the sheathing of the sword in Ghost of Tsushima: Director’s Cut.

One of the first arguable flaws of the Sony Pulse 3D is that the noise isolation is near absent. With it on, I can clearly hear the mechanical keyboards in the office clacking away. But at the same time, there’s no sound leakage, so the colleagues that are typing away furiously right next to me can’t hear what I’m listening to. All this is likely due to the semi-open nature of the headset.

In terms of battery life, I would say it’s fair. Sony pegs the battery life on a single full charge at 13 hours. And through average usage, I would say that it’s probably just slightly longer than that by about 30 or so minutes. Though for some reason, it takes three hours to charge, and power retention while not in use is pretty poor: You can charge it to 100%, then not be able to use it because it had been a particularly busy week, and then come back to find that it has run out of battery in the five days you didn’t use it.

There’s also the matter of the integrated microphone, though this is mostly due to issues inherent to integrated microphones in general, especially if I am to compare them to boom mics. On the other end of a voice chat, your voice will sound distant, or lack presence as one friend puts it.

Not being a boom mic also means you can’t put a makeshift pop filter over it. If you sit next to or in front of a table fan, you’ll be able to hear the wind buffeting if you turn on mic monitoring. Discord’s noise-cancelling keeps this at bay, but I can’t say the same, at least not with certainty, on PS5 multiplayer.

All things considered, The Sony Pulse 3D wireless headset does what it says on the tin. It’s worth noting that, around its RM469 price range, it’s not the only headset that can do what it does. This is true for both the 3D sound and sound quality.

On the flip side, if you need a gaming headset specifically for the PS5, then this is probably among the top choices. It is very feature-rich, putting a fair number of features on voice chat software accessible from the headset itself. But again, half of these only work with the PlayStation console, in wireless mode. And with the current parts shortage and scalper pandemic, you’ll probably be hard-pressed to find someone else who has a PS5, let alone one who is also into the same multiplayer games as you.