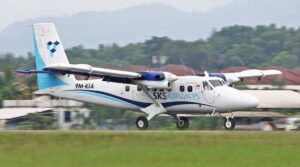 A new homegrown airline will be officially welcome its first batch of customers later this month. Based in Johor Bahru, SKS Airways apparently has been working since 2019 to meet all the requirements set by the authorities before it was granted the full air service licence (ASL) by the Malaysian Aviation Commission (MAVCOM) on 1 January 2022.

The establishment of the airline is a rather interesting choice by its parent company, the SKS Group who mainly involved in property development. So far, the company’s projects are located within Johor Bahru as well as in Perth, Australia.

For starters, the airline is currently offering flights to Pangkor Island and Redang Island from the Subang Airport while flights to Tioman from Subang Airport and Senai Airport are in the works as well. SKS Airways will be flying to these islands using De Havilland DHC-6 Twin Otter Series 300 turboprop planes which have 19 seat capacities each.

The inaugural flight from Subang to Pangkor will take place on 26 January while the airline will begin flying passengers to Redang Island a few days later on 31 January. In terms of pricing, the flight to Pangkor on 26 January costs between RM159.34 to RM313.04 according to our quick check today:

Meanwhile, here is a piece of advice if you decide to visit either of these islands using SKS Airways: make sure to sort out your washroom visit before boarding your flight. This is because the Twin Otters used by SKS Airways has no lavatory on board, as noted in this FAQ.

The post SKS Airways First Commercial Flight To Take Off On 26 January appeared first on Lowyat.NET.