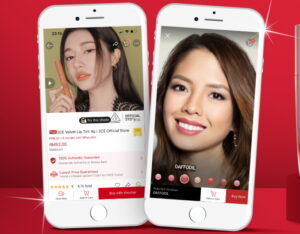 E-commerce platform Shopee has now expanded its BeautyCam feature to more products and brands. For those who are not familiar with the feature, BeautyCam is an augmented reality (AR) camera that has been integrated into Shopee’s app which lets you try on makeup on your face virtually to help you decide before making your purchase.

The feature was first launched by Shopee back in 2019 through a collaboration with L’Oréal but the recent relaunch saw the feature being made available to more cosmetic brands including local outfits such as SILKYGIRL, Wardah and NR Cosmetics. At that time, it was mentioned that the feature utilises AR technology from ModiFace which was acquired by L’Oréal back in 2018.

While it is unclear whether Shopee continues to use the same tech, there were no changes to BeautyCam as far as user experience is concerned. To try out BeautyCam, you can go on the pages of the participating Shopee Mall beauty brands, choose a product that you like, and tap on the “Try this shade” label that is located on the product photos if it is available for the said item.

Shopee has noted that BeautyCam is only available through its mobile app and can only be supported by Android devices with 2GB RAM or more. The feature can also be used on the Shopee app for iOS although no such memory required was listed by the popular e-commerce platform.