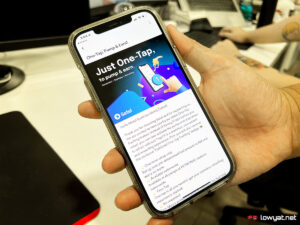 Setel has debuted a new first-of-its-kind One-Tap Fuelling solution via its mobile application. This enables users to activate fuel pumps with just one simple step at over 1,000 Petronas stations nationwide, allowing for a more seamless refuelling experience.

In order to use the new feature, simply launch the Setel app upon reaching a Petronas fuel station and select a preferred pump. From there, place an order between RM20 to RM60 or a custom amount, and the app will then connect to the selected pump upon confirmation. Once the connection has been established, all that’s left to do is refuel your vehicle. Additionally, the company says users can also instantly earn Mesra points by using this method.

However, Setel notes that the new One-Tap Fuelling feature is only available to the first 1,000 registered users for the time being. An even wider but staggered rollout will be carried out in the next two months. That being said, those interested can stand a chance to gain early bird access to the feature by participating in the app’s #SetelOneTapFuelling campaign on Instagram and Twitter.

The company adds that further enhancements are currently in the works for the new feature. Via future updates, Setel users will be able to pre-set their preferred fuelling amount either by litres or a full tank via the app’s Preferences page when setting up One-Tap Fuelling. Moreover, they will also be given the ability to pre-set their preferred payment method, which includes CardTerus for direct payments via debit or credit card, as well as via the Setel Share feature. The latter enables users to share their Setel Wallet or CardTerus with two other individuals to pay whilst jointly earning Mesra points.

As mentioned earlier, the One-Tap Fuelling solution is now available to the first 1,000 registered users of the Setel mobile application. It goes without saying that those eligible to try it out should first update the app in order to use the new feature.