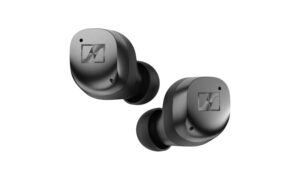 It’s been nearly a good two years since we reviewed Sennheiser’s MOMENTUM True Wireless 2 earbuds and since the acquisition of the brand’s consumer division by the Swiss company, Sonova, there has been no news about the 3rd generation of MOMENTUM earbuds. That is, until now.

Interestingly enough, the source of the leak comes from the most unlikely of candidates: Lufthansa, the German airline. The earbuds were discovered via the carrier’s WorldShop website where, unsurprisingly, the product listing has already been removed. Luckily for us, several sites were able to download the product images, therefore giving us a chance to see what is being offered.

At a glance, the aesthetics of the MOMENTUM True Wireless 3 seem to have undergone some very minor changes, with the addition of a graphite-themed option now being offered. Specs-wise, the new earbuds are supposed to be rated for seven hours of continuous use, with an additional 28 hours stored within its charging case. For that matter, charging both the casing and earbuds is conducted through the built-in USB-C port.

Like its predecessor, the MOMENTUM True Wireless 3 should support Bluetooth 5.2, plus the usual fare of codecs, including SBC, AAC, Qualcomm’s aptX and aptX Adaptive. Further, the earbuds will come with hybrid adaptive active noise cancellation (ANC), with four microphones per earbud.

At the time of writing, no official pricing or launch date was listed, although speculation is putting its value somewhere within the US$275 (~RM1161) range, which is cheaper than what the True Wireless 2 earbuds cost at launch.