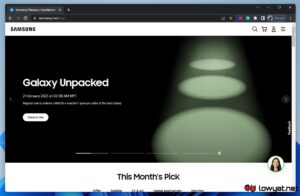 From rumour to accidental revelation and now, it is finally officially confirmed. Samsung this morning announced that it will be hosting the first Galaxy Unpacked event for 2023 on 1 February that will focus on its next-generation Galaxy S Series offerings.

Set to take place in San Francisco, the company pointed out that this will be the first in-person Unpacked event in three years. Even though Samsung continued to release new Galaxy devices throughout the pandemic, the Unpacked event went fully virtual during the period.

Prior to today’s official announcement, the date has been mentioned by the popular Samsung serial leakster @UniverseIce in late December. The launch was then partially confirmed through Samsung Columbia last weekend.

While the graphics from today’s announcement were not identical to the one we saw on Samsung Columbia’s website, you can notice that it still hints at the same thing which is the much-rumoured triple camera setup. Famed leakster Steve Hemmerstoffer or better known as OnLeaks has previously shared several early looks at the Galaxy S23, Galaxy S23 Plus, and Galaxy S23 Ultra which all generally featured the same camera design.

Meanwhile, you can definitely bet that the Galaxy S23 Series will be making its way to Malaysia very soon. Not only that the Galaxy S23 Ultra has been spotted on SIRIM’s database, but Samsung Malaysia has also started giving away an RM200 voucher that they can use to pre-order the upcoming Galaxy S devices, to those who registered their interest for the February Galaxy Unpacked event.

Given our past experience, we reckoned that Malaysian consumers will be able to check out the new Galaxy S23 devices shortly after the Galaxy Unpacked event, if not immediately. Samsung will be live streaming the launch event online just like previous Unpacked events, so do mark 2:00 AM Malaysian time, 2 February 2023 in your calendar.