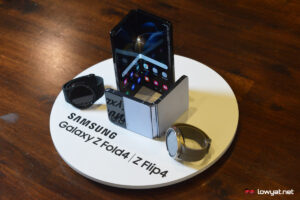 Right after Samsung launched the Galaxy Z Flip4 and Z Fold4 at its Unpacked event on 10 August, the company immediately kicked off the pre-order window for both devices in Malaysia. As the pre-order period will end today, the company today revealed yet another promotion to accompany the release of both foldables into our market that will take place from tomorrow onwards.

Starting from 2 September, Z Flip4 and Z Fold4 customers will be provided with a free Galaxy Watch4 that was launched last year. The version that will be given to them is the Bluetooth model with a 40mm case which currently costs RM799.

Aside from them, they will also receive a 1-year Samsung Care+ extended warranty which is also inclusive of three protective film replacements. To clarify, this particular warranty scheme will kick in after the standard 1-year warranty period is over.

The same offer is also available to those who plan to get their hands on the Z Flip4 Bespoke Edition. In case you missed our report about it earlier, this particular version of the Z Flip4 can be obtained in 75 different colour combinations.

Available exclusively through Samsung Malaysia’s online store although you can actually check out the physical colour sampler at 61 locations throughout the country, it is built-to-order and takes around three to four weeks for the phone to arrive in customers’ hands. Speaking about exclusivity, the 1TB variant of the Z Fold4 is also exclusive to the online store.

According to Samsung, this promo is available until the end of September while stocks last. For more information, you can check out this particular page on Samsung Malaysia’s website although it will only go live tomorrow.

On a related note, you can take a closer look at these new Galaxy foldable during the Z Flip4 and Z Fold4 launch tours that will start at Setia City Mall Shah Alam and Mid Valley Southkey Johor Bharu on 2 to 4 September. The tour will then move on to Imago Mall Kota Kinabalu and Gurney Plaza Penang from 9 to 11 September before its last stop on 29 September to 2 October at Sunway Pyramid.

Not to forget, do check out our initial hands-on experience with the Z Flip4 and Z Fold4 right here.