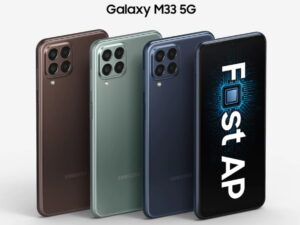 As Malaysia’s 5G rollout is about to get on track once again, you will definitely see more and more 5G phones making their way into our market. Among the latest in the list comes in the form of the Samsung Galaxy M33 5G which has just made its debut in Malaysia.

Running on Samsung’s own Exynos 1280 octa-core processor, the new phone also features a 6.6-inch Full HD+ TFT screen that has a refresh rate of 120Hz. The Malaysian variant also comes standard with 8GB of RAM and 128GB internal storage which can be extended further through the phone’s MicroSD slot that supports up to 1TB card.

For photography, the Galaxy M33 5G relies on a 50MP f/1.8 main camera alongside a 5MP ultra-wide camera, 2MP macro camera, and 2MP depth camera. The phone has also been equipped with an 8MP selfie camera which is housed inside the teardrop-shaped notch of its screen.

Completing the phone’s general specifications is a massive 5000mAh battery that supports fast chargers with a power rating of up to 25W although you need to purchase such charger separately. The Galaxy M33 5G is now readily available from Samsung’s official Lazada store for RM1,499 but you can get your hands on it for slightly less at RM1,399 at 12:00 AM on 27 March.

The post Samsung Galaxy M33 5G Lands In Malaysia With A Starting Price Of RM1,399 appeared first on Lowyat.NET.