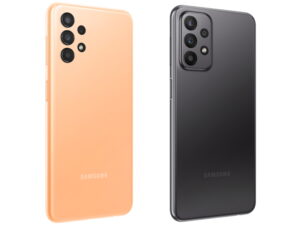 Samsung Malaysia has kicked off its Galaxy A Series campaign this year by launching the pre-order program for the Galaxy A33 5G, Galaxy A53 5G, and Galaxy A73 5G earlier this week. As it turns out, the Galaxy A13 and Galaxy A23 which are designed for the budget market have made their way to our market as well.

From the front, both phones looked rather identical to each and this is mainly because both models are equipped with the same 6.6-inch Full HD TFT display. In Malaysia, they also carry the same amount of RAM and internal storage at 6GB and 128GB, respectively.

When it comes to their pricing, the Galaxy A23 can be obtained for RM999 and the Galaxy A13 goes for RM799. At the moment, only Galaxy A23 can be purchased directly from Samsung Malaysia’s online store but you should have no problem ordering both models from your favourite phone retailers out there.

The post Samsung Galaxy A13 and A23 Now In Malaysia: Price Starts At RM799 appeared first on Lowyat.NET.