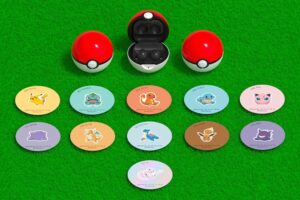 South Korean tech giant Samsung has another Pokemon collaboration going on, this time for its Galaxy Buds 2. This is following the one from last month where the company used the media titan’s branding for its Galaxy Z Flip3 foldable smartphone. Though for its TWS buds, things are a lot less elaborate.

To start, the Samsung Galaxy Buds 2 themselves are not themed, unlike the Galaxy Z Flip3 phone, which is a major missed opportunity. Instead, it gets a Poke Ball-themed case for the original case of the Galaxy Buds 2.

This is not only another missed opportunity, but also pretty impractical unless by popping open the Poke Ball you also pop open the case within. Something along the lines of the Razer Hammerhead Pikachu edition would’ve made more sense, where the original case has been straight up replaced with the Poke Ball.

Another missed opportunity is the fact that the only Poke Ball option is the basic one. It would’ve been nice to see the other upgrades variants like the Great or Ultra Balls being available. But at any rate, who choose to buy the special edition Samsung Galaxy Buds 2 can still choose from its five original colours inside the Poke Ball.

In addition to the Poke Ball, buyers will also get a random Pokemon sticker to go with it. These include the likes of Pikachu, the three Kanto starters and Mew, among others.

The Pokemon special edition of the Samsung Galaxy Buds 2 is listed on the company’s Korean website, with a price of KRW134000 (~RM464). Though while the item is listed and priced, it’s not actually available yet. And even when they do become available, chances are they will be sold out immediately. Also, while it’s not clear if this will be made available anywhere else at a later date, chances are this will be something that’s exclusive to the brand’s home market.