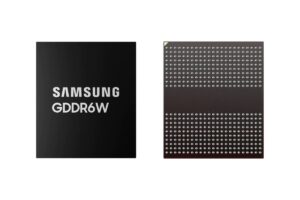 Samsung recently announced GDDR6W, a brand new high-bandwidth memory standard that it says is capable of speeds and performance on par with HBM2 memory. The Korean electronics giant says that the new memory was developed to meet the expectations of producing hardware that is capable of running certain applications seamlessly, such as ray-tracing and virtual realities.

Samsung’s GDDR6W graphics memory is based on the brand’s Fan-Out Wafer-Level Packaging, or FOWLP. Additionally, it also claims it to be the industry’s first next-generation graphics DRAM to be developed with said technology, essentially doubling both memory bandwidth and capacity.

“Since its launch, GDDR6 has already seen significant improvements. Last July, Samsung developed a 24Gbps GDDR6 memory, the industry’s fastest graphics DRAM. GDDR6W doubles that bandwidth (performance) and capacity while remaining the identical size of GDDR6. Thanks to the unchanged footprint, new memory chips can easily be put into the same production processes customers have used for GDDR6, with the use of the FOWLP construction and stacking technology, cutting manufacturing time and costs.”

Another improvement that GDDR6W offers is the reduction in its overall size. Compared to current die processes, FOWLP allows Samsung to directly mount memory die on a silicon wafer, instead of the PCB. This means that the new memory is approximately 36% slimmer than the current GDDR6 format, despite offering the same thermal properties and double the performance number for the expanded I/O per single package.

As per its official blog, Samsung says that the newly developed GDDR6W technology can support HBM-level bandwidth at a system level. HBM2E has a system-level bandwidth of 1.6TB/s based on 4K system-level I/O and a 3.2Gpbs transmission rate per pin. GDDR6W, on the other hand, can produce a bandwidth of 1.4TB/s based on 512 system-level I/O and a transmission rate of 22Gpbs per pin. Furthermore, since it reduces the number of I/O to about 1/8th compared with using HBM2E, it removes the necessity of using micro bumps, thus making it more cost-effective without the need for an interposer layer.

As to when we can expect to see GDDR6W memory become the norm, Samsung says that it will expand the application its new memory format to small form factor devices, as well to high-performance accelerators in AI and HPC applications, but did not specify an actual time frame or roadmap.