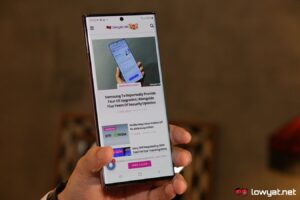 An issue surrounding the onboard GPS support on the recently launched Samsung Galaxy S22 Ultra has been reported by users on the brand’s official community forum. According to the complaints, the phone is unable to receive any GPS signal while using navigation apps such as Waze and Google maps. The users also noted that there are no permanent workarounds for the issue.

The forum thread itself is about a month old, with new complaints still piling in. It is only just recently that a moderator replied to the post, officially confirming that Samsung has acknowledged the GPS issue and is currently working on a software fix. However, they did not reveal when the patch is expected to be released.

It’s also worth noting that the complaints regarding the GPS support issue are mainly coming from users based in Europe, where the Exynos variant of the Galaxy S22 Ultra is sold. But as pointed out by the moderator, the problem appears to be software related so it may be unlikely that the chipset is the cause.

This isn’t the first seemingly isolated issue that has been found on the Galaxy S22 Ultra. Prior to this, some users have experienced a glitch in the phone’s display which causes a pixelated line to appear. And much like the GPS bug, it is also reported to be software related.

There have not been any reports from Galaxy S22 Ultra users in Malaysia regarding the GPS issue so far. But should the problems occur, you can be rest assured that Samsung is confirmed to be releasing a patch for it somewhere down the line.