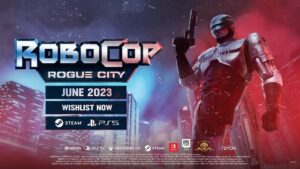 We first heard of RoboCop: Rogue City, way back in July of last year. Back then, all we knew of the game was that it would be coming out sometime in 2023. Now, the publisher at Nacon has released a new gameplay trailer, as well as a slightly more specific release window.

From the trailer, the key takeaway here looks to be that RoboCop: Rogue City will be a first-person shooter. Certain cinematic cutscenes show the RoboCop himself, but for the most part the game looks to put the player in his perspective. There’s one scene that shows grappling of some form, another that shows a melee attack in the form of a punch.

But beyond that, the trailer mostly shows the Auto-9, his signature handgun, in action. Crosshairs show up and the camera zooms in a little at certain points, indicating a zoom feature of sorts. The ED-209 also makes an appearance as an enemy.

At the end of the RoboCop: Rogue City gameplay trailer, Nacon reveals that the cyborg officer will be using the likeness and voice of Peter Weller. Even if the name is unfamiliar, his face and voice should be immediately recognisable, especially if you watched the first two movies of the franchise. Which is quite the way to sell nostalgia with this video game. That, or if you bought the RoboCop DLC for Mortal Kombat 11.

Beyond the reveal of Peter Weller reprising his role, the trailer shows that RoboCop: Rogue City now has a release window of June 2023. Not the most precise of dates, but it’s certainly an improvement over the vague window that we got a whole year ago. The game will be on PS5, Xbox Series X and S, Nintendo Switch, as well as PC. In fact, Steam already has the game.