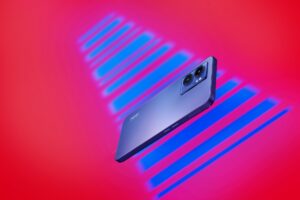 realme is coming out with two new entry-level devices for the Malaysian market in the form of the Narzo 50 5G and 50 Pro 5G. Both phones will be available on realme Malaysia’s official Lazada store starting from today onwards.

First up, we have the Narzo 50 Pro 5G which is the higher-end model in the lineup. It features a 6.4-inch Full HD AMOLED display that also has a refresh rate of 90Hz and is protected by Corning Gorilla Glass 5.

At the same time, the phone runs on a MediaTek Dimensity 920 alongside 128GB of internal storage. The new phone is also equipped with 8GB RAM which can be expanded further via virtual RAM expansion of up to 5GB.

The rear of the phone sports a three-camera setup made up of a 48MP main camera, an 8MP ultrawide, and a 2MP macro lens. On the front, the Narzo 50 Pro houses a 16MP selfie camera as well as an under-display fingerprint scanner that can double as a heart rate monitor.

The phone supports Wi-Fi 6, Bluetooth 5.2, and of course 5G, though neither of the new Narzo phones is currently on DNB’s list of supported devices. As for audio, the phone comes with a 3.5mm headphone jack and stereo speakers that support Dolby Atmos.

The standard Narzo 50 5G sports a larger 6.6-inch FHD+ 90Hz IPS display and runs on the MediaTek Dimensity 810 processor. Just like the Pro variant, the phone is being offered in Malaysia with just one configuration that includes 128GB of internal storage and 6GB RAM with the support for virtual RAM of up to 5GB. Unlike the Pro, the Narzo 50 only has a side-mounted fingerprint scanner.

The back of the phone has a 48MP main camera and a 2MP depth sensor while the front is equipped with an 8MP selfie camera. It has an audio jack, stereo speakers, and Bluetooth 5.3 compatibility but unfortunately, doesn’t have the support for Wi-Fi 6.

The post realme Narzo 50 5G Series Now In Malaysia For As Low As RM899 appeared first on Lowyat.NET.