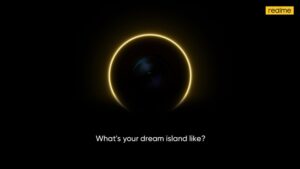 The cutout on the display has for some reason become the norm when it comes to front-facing cameras on phones. Credit where it is due, Apple has made a pretty innovative method of hiding it in the form of the Dynamic Island. But rather than going the extra mile to get rid of the cutout, phone makers are already looking to copy the useful camouflage. One brand is even crowdsourcing ideas from its own fans in the form of a challenge. And the brand is none other than realme.

The company has a contest which it calls the “realme Island – Creator Challenge”, calling for fans to list their ideas and suggestions to be added to its Dynamic Island ripoff. Participants are to submit drawings, GIFs, or simply a text description explaining the way they envision the realme Island working, including what it would look like and what benefits it would bring to other users.

The community post was published on 19 September, with a relatively recent edit today. Entries are to be submitted simply as replies to the post, with the contest open to submissions until the end of today. realme will then take three ideas it likes the most and post them on its official Facebook and Instagram accounts, after which fans can vote for their favourite.

The winner will be announced on 24 September, though no actual prize for winning this contest was noted on the community post itself. Going into the terms and conditions, there’s the usual bit that says that participants grant realme a free, trasnferrable, world-wide, perpetual license to use and adapt submissions without notification or permission.

It should be no surprise that one of the many Chinese phone makers would jump at a chance to copy an idea that’s actually new and innovative. Though for all the similarities between MIUI and iOS, it’s perhaps surprising that all Xiaomi has in terms of a Dynamic Island copy is an independent third-party custom theme.

The post realme Crowdsourcing Ideas For Its Own Dynamic Island appeared first on Lowyat.NET.