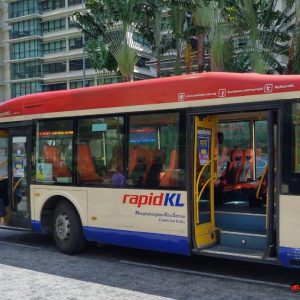 Rapid KL has launched a new pilot programme called Bus Skip Stop Xpress that aims to help make commuting in the Ampang area more convenient, at least for those working near Ampang Park. The service directly travels between the Ampang LRT station, Ampang Park, and KLCC, with no other stops in between.

The pilot programme will run for three months, starting 16 May until 16 August. Bus Skip Stop Xpress only operates on weekdays, not including public holidays, and only accepts cashless payments such as Touch n Go, travel passes, and concession cards.

The bus service costs RM1.90 each way if you do not have an unlimited travel pass such as My50 or the Keluarga Malaysia pass.  My50 can be purchased at any Prasarana rail station counter with cash or you can pay electronically through the BonusLink app, although you’ll have to go to one of the few selected stations to redeem it.

Taking Bus Skip Stop Xpress could be beneficial to some car commuters as the bus can take advantage of the bus lane near Ampang Park, cutting the journey slightly shorter during the morning jam. DBKL previously started testing dedicated bus lanes in the Jalan Ipoh corridor for certain bus routes, though the trial just ended and there’s been no word on whether the initiative will be expanded.

Rapid KL also recently relaunched its free shuttle bus service for travel between the Awan Besar LRT station and Pavilion Bukit Jalil. It’s only running until 31 May and has a frequency of 30 minutes from 8 AM to 11 PM.