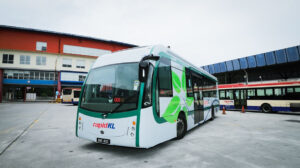 “This initiative is also in line with the Infrastructure Environmental Policy Statement Pledge and the 12th Malaysia Plan (12MP) which is a carbon neutral target through carbon emission reduction by 2050,” said Rapid Bus CEO Mohammad Yazurin Sallij. Rapid KL added that the trial is in line with its Bus Electrification Program, which aims to replace all of the service’s diesel buses with fully electric ones by 2030.

Mohammad Yazurin hopes that passengers or residents along the routes involved would look forward to trying out the new electric buses during the period, which is slated to end on 13 June 2022. Additionally, he also encouraged them to also provide their feedback on how the service could be further improved in the long run.

Of course, this isn’t the first time that Rapid Bus has dabbled with the technology. Currently, a total of 15 electric buses are actively in service for its BRT (bus rapid transit) service in Sunway City, Subang. The operator states that these have been in operation since 2015, with a total journey of more than 659,000 kilometres and are equipped with overnight charging capabilities.

Outside of KL and the Klang Valley, other locations in Malaysia have begun embracing electric buses as part of their own public transport services as well. Most recently being the cities of Kuching, Johor Bahru and Melaka, with the city of Taiping, Perak also aiming to debut its own later this month.