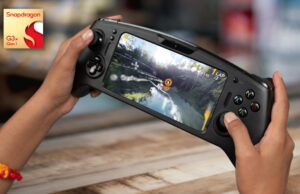 After introducing its new flagship-tier offering for 2022, the Snapdragon 8 Gen 1 on the first day of Snapdragon Tech Summit 2021 yesterday, Qualcomm shifted its attention to another new product in the form of Snapdragon G3x Gen 1 which is designed for the gaming market.

In other words, the Snapdragon G3x Gen 1 would not have to adjust to constraints that smartphones may have such as pocketability, size, and thermal limits. In addition to that, Qualcomm is also pitching the new platform as a powerful SoC for stand-alone gaming devices that are not only meant for Android games and apps but also able to stream games from a console, PC, or cloud gaming service.

However, Qualcomm only provides very basic information when it comes to what made the Snapdragon G3x Gen 1 tick. For now, Qualcomm said that the 5G-enabled platform carries a Kryo CPU, Adreno GPU, and FastConnect subsystem for Wi-Fi 6E as well as Bluetooth 5.2 and Snapdragon Sound support.

On another hand, the company did list down some of its capabilities including the support for 10-bit HDR, 4K output at up to 144fps, variable rate shading, and USB-C. In addition to having a number of proprietary enhancements such as Game Quick Touch, Game Color Plus, and Game Smoother, the driver for the Adreno GPU within Snapdragon G3x Gen 1 is updatable too.

Alongside the new SoC, Qualcomm has also introduced the Snapdragon G3x Handheld Gaming Developer Kit which is made by Razer. Comes with a 6.65-inch Full HD+ 120Hz OLED display, the Snapdragon G3x Gen 1 variant that has been equipped into the dev kit features an 8-core Kryo CPU with a peak speed of 3GHz.

Aside from that, the dev kit also comes with a 6000mAh battery and Full HD webcam that captures video at 60fps and 5MP photos. 5G and Wi-Fi 6E comes as a standard too given that these new generation of connectivity technologies are native to the platform.

Since it is made exclusively for developers, the Snapdragon G3x Handheld Gaming Developer Kit will not be sold to the public. No words on the availability of end users products as well, since Qualcomm said that it needs to get Snapdragon G3x Gen 1 into the hand of developers first before manufacturers can move forward.