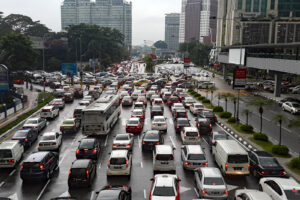 Daily Klang Valley commuters are no stranger to traffic jams but lately, the congestion seems to be getting noticeably worse. It also doesn’t help that public transport systems such as the LRT have recently experienced a series of major disruptions one after another.

Works Minister Fadillah Yusof has revealed that the government has received several proposals from private companies to build new highways in Klang Valley. In an apparent effort to reduce congestion in the city, the Works Ministry has given the green light for some of these proposals while others are still under consideration.

The approved highways are the PJD Link, Putrajaya-Bangi expressway, and KL NODE, with Fadillah saying that he hopes those companies will comply with the set requirements and conditions set by the government. The minister also admitted that there was no guarantee that building more highways would help reduce traffic jams as there is an increasing number of vehicles on the road.

He claimed that if road and public transport usage was split between 60% and 40% respectively, it could offset the increased number of vehicles and possibly reduce traffic congestion. Fadillah also mentioned that any new highway would need to follow a development plan based on a five-year study.

Speaking of new roads, the Works Minister also revealed that the Pan Borneo Highway, a project meant to connect Sabah and Sarawak that has been in the works for decades, is expected to finally be completed within the next five years. Additionally, Klang Valley is also getting a new public transport option as the first phase of the MRT’s Putrajaya line is officially set to start operating on 16 June.