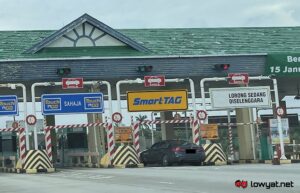 PLUS has announced that it will reinstate SmartTAG lanes at key toll plazas as a response to complaints from consumers who have experienced congestions at various PLUS toll plazas due to the implementation of the RFID payment system from Juru to Skudai on 15 January.

At the same time, the company has also noted that its customer service assistants are already on the ground with portable detection devices at all 158 RFID lanes in 74 toll plazas to help out any users that got stuck at those lanes. Furthermore, PLUS is planning to install double-arm lane barriers and paint visual cues for the RFID detection zones.

Even though RFID for toll payments has already been implemented for almost four years beginning with the original public trial in 2018, it is only for the past few days that an unprecedented number of complaints regarding the payment system have come to light.

While PLUS’ implementation took place on 15 January, many seemed to come face to face with the RFID system for the first time as they head out to their workplace on the Monday morning of 17 January. Quite a number of complaints were due to the unresponsive RFID reader which naturally led to unnecessary congestions because many vehicles then need to reverse their car and move to another booth to make their payments.

On another hand, users have also reported that PLUS has completely removed the SmartTAG options at certain toll plazas, despite saying that the discontinuation will take place in stages, and this caused long queues at Touch ‘n Go lanes. The whole issue certainly has caused quite a ruckus to the extent that the issue has caught the attention of many parties including the Malaysia Competition Commission as well as the Cabinet and Prime Minister.

Even though Touch ‘n Go has actually stopped selling SmartTAG since 2018, you can still buy similar devices at various retailers and popular e-commerce sites until today. One can also choose to aftermarket integrated units such as LokaTAG directly into their vehicles while some cars like Perodua Aruz and selected variants of Perodua Myvi even have a built-in SmartTAG-like device as standard.

PLUS previously have announced that toll payments through TnG card and SmartTAG will be phased out in stages. Given what has transpired for the past few days, we don’t think it will happen anytime soon though as they not only RFID weaknesses but also showed how SmartTAG is still quite relevant among road users.

The post PLUS To Reinstate 43 SmartTAG Lanes Starting From 25 January appeared first on Lowyat.NET.