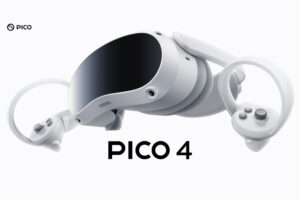 PICO XR has announced that it is bringing its next standalone VR headset, the PICO 4, to Malaysia. The launch is scheduled to take place in the middle of next month, complete with a teaser of where it will take place. The teaser image was recently posted on the company’s official Facebook page.

If you need an introduction to the PICO 4 VR headset, it is, as mentioned earlier, a standalone headset that can operate without needing to be connected to a larger system. It runs the Qualcomm Snapdragon XR2 chipset, and sports a 1200 PPI 4K+ display with 90Hz refresh rate. To further reduce the size of the headset, it uses what is known as Pancake optics, which reduces the distance between the lens and the display itself.

On the outside, the PICO 4 has four simultaneous localisation and mapping (SLAM) cameras on tracking duty. It has controllers that will look familiar enough to anyone who has dabbled with VR hardware. Though notably, these controllers are 6DoF controllers, with what the company calls HyoperSense motors, for greater immersion into VR content. Speaking of content, the PICO 4 uses the company’s own PICO Store for its content library. If you need more than what is on offer, then you’ll be glad to know that Steam VR is an option.

Powering the PICO 4 VR headset is a 5300mAh battery, which the company claims can give it up to three hours of use time. It also weights in at 295g without the adjustable straps, which helps with reducing fatigue if you intend to have it on for as long as it can run.

According to the teaser image, the PICO 4 standalone VR headset is set to launch on 12 October. The venue looks to be Sunway Pyramid, judging from what is being shown.

The post PICO 4 VR Headset To Launch On 12 October In Malaysia appeared first on Lowyat.NET.