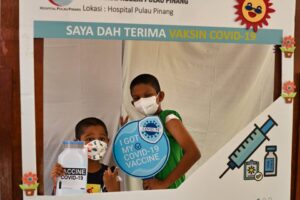 The Ministry of Health (MoH) has announced that the PICKids COVID-19 vaccination programme for children between the ages of five to 12 will no longer be offering the first dose after 15 May. This is due to the fact that the programme has had a low uptake, and the ministry wants to avoid wasting vaccine shots.

According to MoH, between the time the programme launched on 3 February up to 12 April, only 38.6% of eligible children have taken the first dose of the vaccine, with 195,865 receiving both doses. In the last seven days, the programme has only administered an average of 4,500 first doses daily.

This is in stark contrast to how many of the vaccines the government procured for the PICKids programme, as they had prepared enough doses for 80% of children in that age group. Because Pfizer’s Comirnaty vaccine cannot be used after six months, MoH has decided to stop offering the first dose soon to avoid wastage, and this decision also includes the Sinovac vaccine for kids.

After 15 May, parents can no longer get the Pfizer shot for their children from public or private facilities, leaving them having to pay for Sinovac jabs in the private market. However, kids who have not yet reached the age of five by the deadline will still be eligible for the free vaccine and can register on MySejahtera to receive an appointment.

The post PICKids Will No Longer Offer First Vaccine Dose After 15 May appeared first on Lowyat.NET.