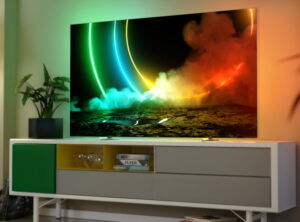 After launching the 8500 and 7000 Series earlier this year, Philips TV has expanded its Android TV offerings in Malaysia by announcing the arrival of the OLED706 4K TV. As you can tell from its name, the new model comes with an OLED display as opposed to the two previous models which feature a traditional LED panel.

The OLED706 is also powered by a slightly different variant of the quad-core P5 processor which has been infused with a deep-learning AI algorithm to enhance the TV’s output. On the other hand, the new model still features the Ambilight LED array that projects the on-screen colours to the walls behind the TV to help increase the immersion level.

Equipped with 32GB of internal storage, the TV also features a pair of 10W speakers and a 30W subwoofer. Price-wise, the 55-inch variant of OLED706 carries a price tag of RM8,999 while the larger 65-inch version can be obtained at RM11,999.

That being said, Philips TV has noted that the OLED706 4K Android TVs are currently being offered for slightly less at RM7,999 and RM9,999, respectively as part of its launch promotion. Both OLED706 variants are now readily available through Philips TV’s official Shopee store and authorised dealers throughout Malaysia.