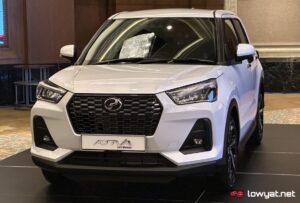 Its existence has been made known last month but it is only today that Perodua has officially launched a new version of its highly popular Ativa SUV. Simply called the Ativa Hybrid, it is essentially a Daihatsu Rocky e-Smart Hybrid that was launched in Japan last November.

In fact, the model is imported directly from Japan albeit with Perodua and Ativa logos on it. Furthermore, the Ativa Hybrid is being brought here not to boost Ativa’s sales but more as a test subject for Perodua’s long-term study on mobility as a service.

Hence, that is why the Ativa Hybrid is being offered only through a subscription service. In addition to that, Perodua imported only 300 of them to Malaysia as that is the maximum number allowed by the authorities for vehicles that are used for evaluation.

Speaking about subscriptions, Perodua has already established such a service called EZ MOBi back in January last year but it is only available to corporations. Similar to packages offered by existing players such as Renault, GoCar, and Flux, Ativa Hybrid customers will only have to focus on their monthly fees while other matters associated with car ownership such as road tax, insurance, and service are handled by Perodua.

Ultimately, the Ativa Hybrid subscription programme is meant to gauge consumers’ acceptance of such offerings. On top of that, Perodua is also studying the driving behaviours of hybrid vehicles in Klang Valley, Penang, and Johor Bharu.

President and CEO of Perodua, Zainal Abidin Ahmad also said that the data from the study will also be used to “anticipate customers’ needs” in regard to electric vehicles. On stage at the launch event today, the company did not reveal the subscription cost of the programme but Paultan.org reported back in August that the Ativa Hybrid subscription has a five-year tenure with an upfront payment of RM2,150 alongside a monthly fee of RM500 per month.

That being said, Before you reach out to your nearest Perodua dealers though, we can confirm to you that all 300 spots have been filled. In fact, the first five customers were actually present at the launch event today.

As for the Ativa Hybrid itself, it runs on what Perodua described as a series hybrid system. In general, the compact SUV’s main drive is a 78kW electric motor that can deliver maximum power of 106 PS and up to 170Nm of torque.

The motor is being paired with a 4.3Ah battery which is being charged by the accompanying 1.2L WA-VEX three-cylinder engine that itself produced 82 PS of power with maximum torque of 105Nm. Fuel consumption is rated at 28.0 km/L according to WLTC standards although Perodua listed the rate slightly higher at 31.1km/L based on the Malaysia Driving Cycle (MDC) standards.

Without opening the hood, you can also spot the Ativa Hybrid by its grille and bumper designs which are slightly different from the standard Ativa. Furthermore, there is no variant label on its bonnet door alongside the Ativa badge.

Unlike the standard Ativa which can be obtained in up to five different colourways depending on specific variants, the Ativa Hybrid is only available in Pearl White. The differences between both of them also extend further into several other factors including tyre size and air-conditioning control panel as well as the existence of Electronic Parking Brake, Auto Brake Hold System, and battery ventilation vents.