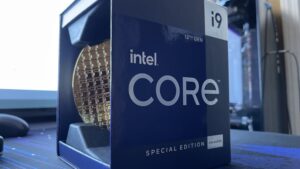 Intel’s newest 12th generation Core i9-12900KS has barely been on the market, yet the special edition CPU is already breaking world records for blistering performances and extreme clockspeeds. In regards to the latter, one overclocker managed to do just that, and then some.

The overclocker in question goes by the handle TSAIK, who successfully managed to push the 12900KS well beyond its rated 5.5GHz boost clock. Specifically, they managed to push the CPU to run at 7.45GHz, which is a huge margin. Other components used by TSAIK to achieve this include an MSI MEG Z690 Unify-X motherboard, 16GB of Samsung DDR5-4800 memory, an NVIDIA GeForce RTX 2060, 128GB SATA SSD, and Windows 7 OS.

Now, it goes without saying that, in order to achieve that 7.45GHz, there are some special parameters that TSAIK needed to adhere to. First off, TSAIK made use of liquid nitrogen or LN2, and constantly bathed the CPU in the freezing liquid. Second, and as impressive as it sounds, the massive boost in clockspeed was limited to a single Performance core (P-Core). In short, one would not be able to obtain those speeds through conventional means of cooling.

To be clear, TSAIK’s achievement puts the overclocker in the category for highest CPU frequency obtained for the 12900KS, and not its performance in benchmark tests, such as Cinebench. That honour goes to Tom’s Hardware contributor, Allen “Splave” Golibersuch, who currently holds the HWBot record for highest Cinebench scores for the Intel CPU.