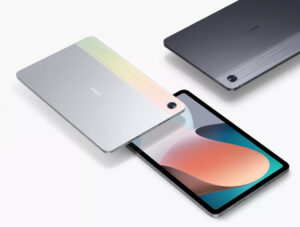 OPPO officially entered the tablet market last February when it launched its first-ever tablet, the OPPO Pad. It now appears that the device will soon be joined by a new family member, as the company has recently unveiled a new variant: the unimaginatively named OPPO Pad Air. Much like that particular product that OPPO had seemingly taken inspiration from, the newly introduced tablet is marketed to be a more affordable option for consumers.

According to OPPO, the Pad Air will feature a 2K-capable display with 60Hz refresh rate, and quad speakers. Under its hood is a Snapdragon 680 chipset that is paired together with up to 6GB of RAM, and up to 128GB of internal storage. Additionally, the tablet is equipped with a 7,100mAh battery and features 18W fast charging capability via USB-C.

In terms of imaging, situated in the bezel of the Pad Air is an 8MP front-facing camera, whereas found on the back is an unspecified single camera. OPPO adds that the tablet is also compatible with its Pencil accessory, as well as others that are designed specifically for it, such as a keyboard integrated cover.

Design-wise, the Pad Air is shown to sport a design that is almost similar to the initial model, but with a thinner and lighter body. The tablet is claimed to measure at only 6.94 in thickness, which is slightly thinner than the original OPPO Pad, though its weight is still unknown at this time. As for colour selection, the new device is offered in either Fog Grey or Star Silver.

The new OPPO Pad Air is slated to officially launch later this month in China on 23 May 2022, alongside the company’s latest mid-range smartphone offering, the Reno 8 series. Pricing for the tablet will only be revealed by then, and its potential availability in other regions is still unknown at this time.