OnePlus has officially launched the OnePlus 10T, its latest flagship smartphone that DNB may have previously leaked before the phone’s existence was confirmed by the brand. As expected, the refresh of the OnePlus 10 Pro comes with massive improvements in a similar body, but there are also some trade-offs that the company had to make to keep it at its price point.

First off, it runs on the bleeding-edge Snapdragon 8 Plus Gen 1 chipset from Qualcomm with up to 16GB of LPDDR5 RAM and 256GB UFS3.1-based internal storage. As revealed by chief designer Hope Liu a while back, the iconic physical alert slider is notably absent from the phone to make room for more battery and antenna components, a first for a OnePlus flagship device. Moving on to the display, the phone sports a 1080p 6.7-inch 120Hz AMOLED panel, a downgrade from the 1440p LTPO panel of the previous model. Similar to the 10 Pro, it is equipped with an under-display fingerprint scanner.

The company also had to make some compromises to the camera. Even though the phone still comes with three cameras on its back, the OnePlus 10T does not carry the Hasselblad moniker as a cost-saving measure. The camera also gets a new design where the bump seamlessly blends with the backplate. 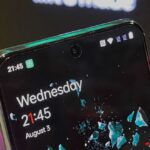 Leading the tri-camera array is the phone’s main camera which features a 50MP Sony IMX766 sensor and an optical image stabilisation system. The module also includes an 8MP 119.9-degrees ultra-wide camera and a 2MP macro camera that supports a close-up range of between 2 to 4 cm, while there is also a 16MP selfie camera.

When compared to its predecessor, the OnePlus 10T receives a slightly smaller 4,800mAh battery. That being said, the biggest difference here is the presence of the ludicrously fast 150W SUPERVOOC charging, something we’ve only previously seen in select mid-range OnePlus phones. The brand claims that the phone can charge from 1% to 100% in a mere 19 minutes. The OnePlus 10T will be available in Malaysia starting from 1 September but the local pricing will only be revealed on 18 August. It will ship with OxygenOS 12 out of the box and will be the second device to get the upcoming OxygenOS 13 update later on, after the OnePlus 10 Pro.

The post OnePlus 10T Coming To Malaysia This September appeared first on Lowyat.NET.